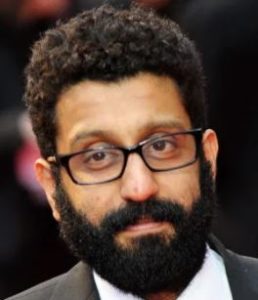 You might remember Adeel Akhtar as an innocent terrorist Faisal from Chris Morris’s masterful satire Four Lions. If, dear readers, you haven’t watched that movie, go watch it. You are missing a deal in life. Anyway, Adeel Akhtar was set to appear in another masterful TV show called Sweet Tooth in 2021.

Know more about Adeel Akhtar in the article below. Read everything about him as well as his wife and kids and his parents and siblings.

Sweet Tooth premiered this Friday (i.e. 5 June 2021) on Netflix and Adeel Akhtar played one of the main roles in the show. On Netflix, one can find the following description of the show:

“On a perilous adventure across a post-apocalyptic world, a lovable boy who’s half-human and half-deer searches for a new beginning with a gruff protector.”

Apart from Adeel, other famous actors like Will Forte, Nonso Anozie, Dania Ramirez, Aliza Vellani, Christian Convery, etc. Adeel Akhtar is playing the role of Dr. Aditya Singh. For further details about his role, you will have to watch the show yourself, dear readers.

Adeel Akhtar was born on 18 September 1980. Meaning, the award-winning actor was 41 years of age, as of June 2021. And because he celebrated his birthday on the 18th of September of every year, his zodiac sign was Virgo.

Adeel Akhtar was born in London to a Pakistani father and Kenyan mother. So, Adeel was English with South Asian and African heritage. So, we can say that Adeel’s ethnicity was half-South Asian half-African British.

Adeel’s ethnicity has played an important role in his life. He has once said that being brown, he was inherently political. There was also an occasion when he was treated unfairly because of his ethnicity. Once after a flight to New York, he was arrested because the authorities thought he was a terrorist.

They took his passport and detained him. Afterward, his father took him to a QC, wanting to sue the FBI for the inappropriate behavior.

Adeel Akhtar’s father’s name is Humayum Akhtar, who came to England from Pakistan. In England, he trained to become an immigration lawyer. And his mother was from Kenya. His parents first met at Heathrow Terminal 3 and later got married in the traditional arranged marriage way.

Adeel’s father always wanted him to be a lawyer and be a pillar of the Muslim community of their county. However, he was bitten by the bug of acting. It was his mother who supported him in his quest to become an actor. She was the one who took him to National Youth Theatre Workshop, without telling his father.

His mother was also an inspiration for him. She came to England when she was 17 and survived alone for a long time. She even almost died because of a gas leak accident.

In a 2016 interview, Adeel also mentioned that he owed a few of his characters to his parents. For example, his father taught him to finish anything he started. And his mother taught him that you can draw inspiration to overcame any kind of difficulty from within yourself.

We do not know about Adeel’s siblings, or if he has any siblings.

Adeel Akhtar stands at the height of 5 ft 6 inches, which is a below-average height for a British man. Talking about his other features, Adeel has a brown complexion and wore his hair long.

Adeel started to act when he was a young boy and his mother took him to the National Youth Theatre. But he did not start to pursue acting professionally. In fact, he attended Cheltenham College and studied law. His father wanted him to be a lawyer and that was what he was doing.

He got into the Actors’ Studio Drama School in New York. After that, his mother was convinced that he was going to make it as an actor. And slowly, his father came around too. During the early days when his career was not taking off, he worked the other jobs, like in which he sold insurances over the phone, or in which he washed the dishes in a sandwich shop.

In his early career, Adeel did several theatre productions, especially with Half Moon Theatre in London (he even became a patron of Half Moon Theatre in 2016). His career started to take off in the early years of the 2010s when appeared in several movies like Four Lions and The Dictator.

More critically acclaimed roles came with TV shows like Utopia, River, The Night Manager, Unforgotten. Adeel was even nominated for BAFTA for his role in Utopia. In 2016, he went on to win the BAFTA award for his portrayal of a father who murders his own daughter in a TV movie called Murdered by My Father. He became the first (and to this day the only) non-white actor to win a BAFTA for best actor.

Adeel Akhtar is married to a woman called Lex (full name not known). He is actually very careful about protecting the privacy of his wife. Actually, we picked up the name Lex from one of his Instagram posts. From Adeel’s Instagram, we also picked that Lex is a white British woman.

It wasn’t like Adeel is a very frequent social media user (he had only 62 posts and about 8k followers as of June 2021) but he comes occasionally to Instagram and to post about his family. And we are thankful to him for that.

In one of the interviews, Adeel also mentioned that his wife is a documentary filmmaker. And that they had a Hanuman necklace and whenever she wore that necklace, she got a phone call asking her to do a job.

Anyway, Adeel and Lex have a very happy marriage with two kids, both sons. The eldest is called Arlo and the youngest, who was born in late 2018, is named Ezra.

Adeel and Lex shared a very intimate relationship. The intimacy was sustained by a lot of sex before their kids were born. After the kids, it was their shared love for their kids, jokes, and occasional vacations.

For example, his wife once called him “the tired-looking, older, not very fit version of Riz Ahmed”. And Adeel happily recounted that during an interview. Furthermore, towards the end of 2020, the entire family traveled to New Zealand. 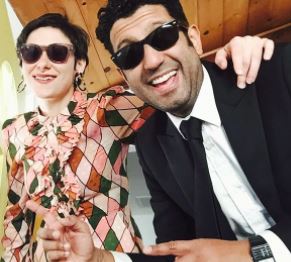 Adeel Akhtar with his wife Lex during the Sag Awards 2018 (PC: Adeel’s IG)

The family of four lived in England.