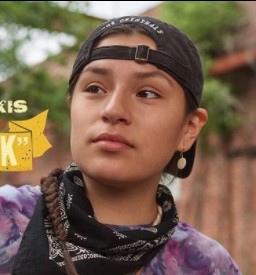 If you ever felt the comedy of Tarantino’s magnum opus Reservoir Dogs was just too dark for your liking, then don’t worry we have got a good comedy show recommendation for you–and the name is not very different too.

Paulina Alexis plays one of the main characters of the new teen comedy. We will see what’s so special about Reservation Dogs and what character does Paulina plays in the FX original. Also, we will talk about her age, parents, net worth, and boyfriend in this Paulina Alexis wiki.

Reservation Dogs follows the lives of four indigenous American teens living in rural Oklahoma. The four teens are Bear Smallhill (played by D’Pharaoh Woon-A-Tai), Elora Danan (played by Devery Jacobs), Cheese (Lane Factor), and Willie Jack (played by our very own Paulina). However, the group of four friends once used to be a group of five.

The fifth member of the group, Daniel, died according to the show’s synopsis. All the remaining four friends blamed the small, boring town of Oklahoma for Daniel’s death, claiming the town has crushed their spirits. In hopes of honoring Daniel’s soul, the four close friends decide to take away Daniel’s dream to go to California, a place that is exotic and full of mystery than their rural Oklahoma.

While the characters in Reservation Dogs do not belong to a specific indigenous tribe, the entire show was shot on the Muscogee Nation reservation in Oklahoma. From day one of the show’s premiere, fans have cherished the authenticity of the show.

In fact, authenticity was one of the major things Reservation Dogs showrunner’s paid big attention to. Co-creator Sterlin Harjo said, “As far as showing what Native people are alike, we’re funny, we’re sad, we’re depressing, we’re interesting, we’re quirky, we’re everything. That shouldn’t be a radical thing that they’re showing us as human beings but it’s very radical and it’s about time in 2021.”

Fans of the show also did not let teenager’s common words like “skoden” and “mvto” go unnoticed. Reportedly, “skoden” is short for “let’s go then” whereas “mvto” means “thank you” in the Mvskoke language.

Every new episode of Reservation Dogs drops every Monday on Hulu.

Paulina Alexis was reportedly born in the year 2001 which made her 19 years of age as of August 2021. She celebrates her birthday on the 7th of September every year. Paulina’s zodiac sign is Virgo.

Paulina Alexis hails from Alexis Nakota Sioux Nation in central Alberta, Canada, which is also her hometown. The TV star is a Stoney tribe member and that is her ethnicity.

Paulina Alexis is one of the four kids of her parents, Yvette Alexis (mother) and Rob Alexis (father).

As for siblings, Paulina Alexis has three brothers, all of whom are filmmakers and actors. Paulina’s brother, Frick, is a photographer by profession. Nathan and Brandon are Paulina’s other two siblings.

Paulina Alexis comes from a family of cultural singers, artists, hunters, filmmakers, and scholars. In fact, her grandfather, the late Logan Alexis, was a renowned round dance singer and songwriter in Treaty Six Territory.

Actress Paulina Alexis stands at an average height of 5 feet 6 inches and weighs no more than 60 kilograms.

Reportedly, Paulina’s net worth was estimated to be around $200 thousand as of August 2021.

Paulina’s passion for acting stems from her own family, who are deeply involved in the arts. Paulina’s childhood involved making short movies with her siblings in their own home.

Paulina first shot into popularity in 2020 when she masterfully played the role of a 14-year-old Mohawk troubled teen in 2020 Tracy Deer’s feature, Beans.

Paulina is all set to appear in Jason Reitman’s Ghostbusters: Afterlife (2021).

In 2021, Paulina has signed with APA (The Agency of Performing Arts). She is represented by Darryl Mork Talent Management.

Paulina had never sparked any dating rumors with any people so far. Therefore, it’s safe to say that Paulina was single and had no boyfriend in 2021.