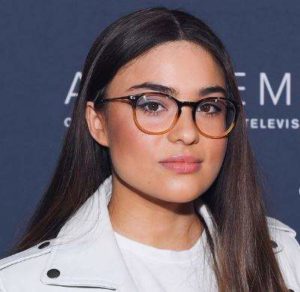 Now, following the premiere of Reservation Dogs on August 9, 2021, discover all about Devery in this Devery Jacobs Bio.

Most of all Devery Jacobs is proud to be a part of Reservation Dogs because it authentically captures the spirit of life in Native communities, while also focusing on characters and stories to which viewers of any background can relate.

Created by Sterlin Harjo and Taika Waititi, the FX’s new Indigenous humor follows a group of Indigenous teens (that includes Elora Danan) living in rural Oklahoma with dreams of a better life in California.

Since early on, the show is already making history as the first TV series to feature an all-Indigenous team of writers, directors, and series regulars.

Devery Jacobs grew up celebrating her birthday every year on August 8th. As she reached the age of 28 in August 2021, the birthday became even more memorable this time because the next day Devery’s most awaited Reservation Dogs was releasing.

Devery Jacobs was born to the Kahnawa:ke Mohawk ethnicity in Kahnawake, Quebec in Canada.

Her first language is English, but she is had been also learning her native language, Mohawk.

Devery also speaks conversational French. “So much about a person’s perspective is shaped around the language they speak and I would love to see the world through every dialect!”, she shared with defectivegeeks.com as she discussed representation and her role in the second season of American Gods.

Devery Jacobs’s parents Layne Myiow and Clint Jacobs have been by her side through it all. They were there since they first signed Devery up for modeling at the age of 10 and now that her 12-years-in-the-making career is starting to pay off finally, they are right there prouder than anyone could be.

The Jacobs parents have been married since 1996 and all those time they have been calling Kahnawake, Quebec their home.

Devery’s mom, Layne Myiow previously worked as a bartender and now (by 2021) was an owner of Valley Girls Flowers & Gifts. While we could not tell what Devery’s dad, Clint did. From what his Facebook reveals, he studied at Champlain College Lennoxville and went to Weston School.

Kakwitène worked together with her mother at Valley Girls Flowers & Gifts. At the same time, she went to Kanien’kéha Ratiwennahní:rats. Also, she previously graduated from Kahnawake Survival School.

Then, the other sister Kana’tarokhónwe is likely married with two young kids.

Then, Devery also entertained close 4.9K followers on her ‘Devery Jacobs’ Facebook; bio on which read — “Devery Jacobs is a film and television actress, best known for her leading role as Aila in the Canadian Screen Awards-winning Rhymes for Young Ghouls.”

Devery Jacobs had above an estimated $2 million net worth before August 2021.

She is a proud kanien’kehá:ka actor and filmmaker⁣⁣⁣ who has had a passion for acting since she was a child. Devery made her acting debut in 2013’s Rhymes For Young Ghouls and made her directorial debut with her short film Stolen in 2015. (For the latter, she had launched a Kickstarter campaign to fund the project she wrote and was about to direct.)

Devery always wanted to act, since before she even knew that it was a career. She would always make home videos force her sister to direct them and act in them with her. Following this, her mother submitted her, without her knowledge, to an agency in Quebec. Devery was accepted too. But, it did not come without challenges. There was a writers’ strike and she was a teenager and that too a Native kid who was Anglophone living in Quebec, so there were not really many opportunities.

Devery had never thought in the coming years (2017) she would be named one of Canada’s Rising Stars.

Devery Jacobs Partner: Is She Dating Or Married?

While Devery Jacobs is very vocal about her support for several social justice issues, including Indigenous rights, Black Lives Matter, and LGBTQ+ rights, she was yet to open up about her dating life and relationships. She, however, did not appear to have been married before the time of this writing.

Devery Jacobs proudly identifies as a queer. On embracing her queer Indigenous identity, she said, “I wasn’t a 12-year-old knowing that I was queer. I was kind of operating in the world with blinders on and when I came into my queerness.”

Then, it is to be noted that Wikipedia stated, Devery Jacobs’s partner is a Canadian filmmaker and musician D. W. Waterson.

Even her fans were wondering if the two were dating. Back in Jan. 2018, Devery shared a supposed “onscreen” kiss moment with D.W. on her Instagram writing, “Love is love is love. <3” 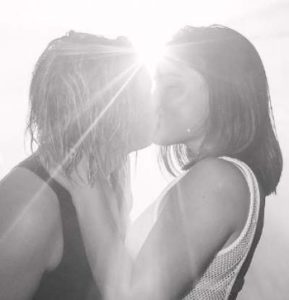