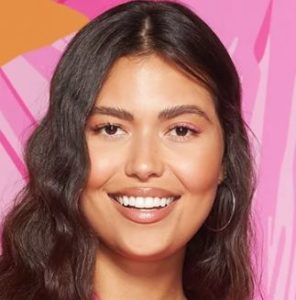 And also find out everything you need to know about Florence including her ethnicity and net worth. Get to know more about this Florence Mueller wiki!

Florence Mueller was one of the temptresses who joined the Love Island season 3 as a part of Casa Amor. What is Casa Amor? Well, 10 new participants will be joining the show in the middle of the season to “tempt existing contestants — and potentially threaten established relationships”.

According to People Magazine, Florence Mueller was 26 years of age in 2021. And brief social media research tells us that Florence celebrates her birthday every year on February 1. Thus, her zodiac sign was Aquarius.

Coming to Florence Mueller’s family, we know for the fact that her mother’s name is Gretchen Ellis and she is a proud mother. Announcing Florence’s appearance on Love Island, Gretchen wrote on Facebook “Florence Mueller is about to debut on the Love island starting tonight on CBS. I am so proud of my daughter. Go, Flo!”

We do not know much about her father but it seems her parents are no longer together. Gretchen’s relationship status on her Facebook was single.

There were other family members of Florence whose relationship with Florence we were not certain about. There was Nellyann Ellis (25 years of age), Richard Ellis (59), another Richard Ellis (34).

And it seems that Florence comes from a mixed-ethnicity family, with a significant African American heritage. Florence is a supporter of the BLM movement.

According to her modeling agency, Next Management, Florence Mueller stands at a height of 5 ft 9 inches. And her figure measurements were 34-25-38 inches. And also, she had brown eyes and brown hair.

Florence also had a tiny tattoo on the wrist of her left hand.

Even before her appearance on Love Island, Florence Mueller was a social media model and enjoyed a huge following on Instagram and Tiktok. On her Instagram account @flomoneyy, she had 99.9k followers as of 25 July 2021. And she might reach 100k followers any day now.

On her Tiktok channel @flomoneyy, Florence had 280.1k followers and over 2.1M likes. Florence was also present on Twitter as @flomoneyyy but she was not as big there. She only had 3.3k followers on Twitter.

Before joining Love Island, Florence was a successful model and before she was a model, she was a very good student at Florida International University. She graduated from Florida International in 2018 with a degree in Marketing and Psychology. She was only the second person to graduate from college. On Instagram, she thanked her family and friend for their support.

And before Florence went to Florida International University, she got an Associate of Arts degree in Business Administration and Management from Miami Dade College. During her college days, Florence had an experience as a volunteer for Food with Love for Poverty Alleviation.

As a model, Florence has worked as a swimwear model for Boutinela, a swimwear firm. She has also worked with FashionNova, a global fashion brand, and partnered for many social media promotions of the brand. Also, Florence was once crowned Model of the Month for February 2021 by BikiniTeam.com.

About 10 months before, during September of the year 2020, Florence Mueller was spotted with Lewis Hamilton, the famous British Formula One racer. Apparently, they were enjoying a yacht trip in Corsica, and later they left the boat to board a helicopter. Reportedly, they flew to Italy, where Lewis was participating in the Tuscan Grand Prix. Lewis had previously dated Nicole Scherzinger.

However, sources close to Hamilton denied any rumors that Lewis might be Florence’s boyfriend. The Sun quoted the said insider, “Lewis and Florence aren’t dating, they’re just good mates…She joined him on the boat as part of a group of pals with Lewis…They get on but there’s nothing romantic going on between them at the moment.”

Well, the last part was at least true for there were other model friends of Florence on the yacht, the friends from Boutinela Kelsey Gil and Chelsea Tresidder. Also, since Florence was going to Love Island, it was likely that she was most likely single.

In some of her Tiktok videos, Florence had mentioned her “boyfriend” but those videos were more likely mock videos that are very famous in Tiktok.