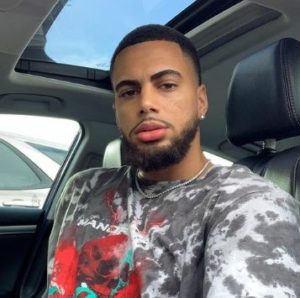 Raul Frias was one of the 10 singles joining CBS’s hit show Love Island as part of the Casa Amor twist. He arrived on the dating series to find love and win the grand prize while competing with the other contestants. The social media star has been a matter of concern for many. So scroll down this Raul Frias Wiki to learn more about him.

Raul Frias earned wide recognition as a TikTok celebrity who stepped into the Love Island Casar Amor Twist for season 3. He was one of the 10 singles who entered the villa to find love debuting on the 25 July 2021 episode. By profession, he is a basketball player hailing from Hialeah, Florida.

Raul Frias celebrated his birthday in April of 1997. He turned 24 years old in 2020. Moreover, he is an Aries by zodiac sign. He also has his own Famous Birthday profile.

Raul Frias was born to his parents Raul Frias and Ysis Gomez in his hometown in Florida, the United States. By ethnicity, he is Dominican, and American by nationality. His father played basketball when he was in the Dominican Republic. Other than that no further information on his parents surfaced in the public domain.

On TikTok, Raul has been questioned whether he was Arab since he looked like one. The same user commented that not only Arab, but he also looked Latino, and mixed all at the same time.

On Raul’s right leg, Raul tattooed a family of three holding hands and moving together. This happens to be one of his distinct features as of this writing.

Coming to social media reach, Raul Frias goes by the name @rahhfrias on Instagram. He gathered a total of 50k followers where he posted 28 times. In the same way, until 25 July 2021, he earned 708 followers on his Twitter, @raulfrias__.

Moreover, Raul was also on TikTok with 470k followers and following. He successfully gathered 4.8 million likes for his TikTok videos.

Raul Frias attended Mater Academy and graduated high school from the same. In high school, he played two seasons at Mater Academy. He was named captain in his senior year. Also, he was named First Team All-Dade County as a senior after averaging 19.1 points, 6.1 rebounds, and 2.3 steals per game. The school secured the title of Florida Association of Basketball Coaches and SourceHoops Class 6A Boys All-State Third Team. Besides basketball, he also played baseball in high school.

Then, Raul attended Long Island University and graduated in 2019. During college, he played in 18 contests as a freshman, all as a backcourt reserve. He played a career-high 18 minutes in a road win at Bryant, registering an assist and steal. He also hit three-pointers against both UMass Lowell and Sacred Heart.

From 2016-2017, Raul played in 32 games for the blackbirds with eight starts. He scored career-high 14 points against Hartford, going 4-for-6 from three-point range in the win. On top of that, Raul also secured a career-high eight rebounds and two assists against the Hawks.

In the game against Wagner, Raul had nine points. Then, he scored eight points against RMU in the NEC tournament while playing for LIU.

According to Love At First Fit, an average salary of a player is $130,000 where the maximum salary is $5 million maximum. Keeping that in mind, Raul Frias has a total net worth of $300 thousand.

Raul is a bi-lingual individual which made it easy for him to pursue an international career. He is fluent in both Spanish and English. He received several awards and accolades including NEC Tournaments Semifinals (2015-16, 2018-19), NEC Regular Season Runner-up (2016-17), NEC Tournament Winner (2017-18), and TBS Distrito Runner-up (2021).

The Dominican player’s current NBA Status is an unrestricted free agent and made it to the 2019 NBA Draft entry.

Raul Frias shared on TikTok about what it is like to date in Miami, Florida in a cryptic way. Most of the users in the comment section who were from the place agreed to what he was saying. Whereas, there were plenty of users who stated that they were either planning to move to Miami or moved recently.

A few days later, Raul posted a TikTok where he hinted with a video that he needed a girlfriend to do a TikTok challenge. And, it was before he joined the show, so the TikTok hinted at his singlehood.

On 15 May 2021, Raul also shared why he visited exes in her house even after the breakup.