Banker-turned-reality star Dylan Barbour shot to fame after appearing on the 15th season of “The Bachelorette” as a contestant.

Competing on the 6th installment of “Bachelor In Paradise,” Dylan furthered his spot on the reality TV pantheon.

Concerning his family life, Dylan lost his biological father to cancer. Time and again, he uploads a remembrance post about his dad on social media.

Judging by the tattoo of his parents on his chest, one can’t help but label Dyan with the title of an ideal. Additionally, he has also inked a palm tree on his ankle.

For a summer program in college, Dylan Barbour studied at The London School of Economics and Political Science.

As a university student, Dylan worked at “NCCA” and “Citi.” Between June 2016 and June 2018, he held an associate job title at “Morgan Stanley.”

In June 2018, Dylan Barbour co-founded “Vizer Inc.” and launched a social impact fitness app of the same name. As the company’s COO, he reportedly bagged a sizeable salary which proved an important part in solidifying his $100k+ net worth.

Searching for love and an ideal girlfriend, Dylan Barbour competed for the heart of Hannah Brown on the 2019 edition of “The Bachelorette.” He lasted only six weeks on the show.

Not the one to quit, Dylan returned to reality TV by featuring on the 6th season of “Bachelor In Paradise.” On the show’s final episode, he got engaged to fellow contestant Hannah Godwin. 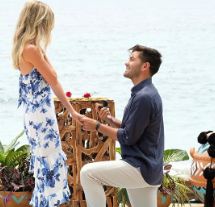 At their star-studded event, Dylan rocked a turtleneck and navy suit while Hannah wore a strapless white gown decorated with feathers.

When quizzed about their marriage plans at the 2019 REVOLVE Awards, Dylan Barbour and wife prospect Hannah Godwin insisted on having a small wedding.

Admittedly, neither Dylan nor Hannah wouldn’t get married on TV. Thus, they didn’t want to have a televised wedding.

As of January 2020, Dylan and Hannah hadn’t moved in together and were spending their time between Los Angeles and San Diego.

To speed up the wedding process, Dylan and Hannah’s families even met with each other in early 2020.