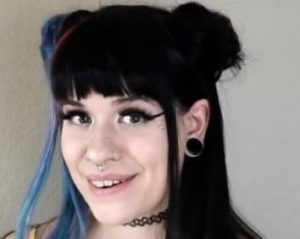 DigitalPrincxss fame skyrocketed as a social media star after showing off her massive Pokemon memorabilia. Then, she again went viral in August 2021. But unlike the other times, this time, it was for all the wrong reasons which she likely didn’t intend to put on the internet.

So, what happened? Stay with this DigitalPrincxss Bio to find out. And also, learn her real name, age, and net worth by the end of this article.

A Twitter user Allison posted screenshots of Marissa’s mugshot and arrest records for neglect of a child on August 27, 2021. She wrote,

“Why is @digitalprincxss trying so hard 2 cover-up that she was arrested for leaving her son home alone while she went out with friends and her neighbors found him alone and crying.”

The post blew up and was widely shared over the internet. This prompted DigitalPrincxss to even make a repose TikTok video where she admitted to being arrest. In response, she remarked, “please do not believe everything that you would read on the internet.”

She shared that though she was arrested for “Neglect of a child”, the charges were soon dropped after knowing she was in the house asleep.

“It was an accident but I’m choosing not to speak up about it until later,” DigitalPrincxss added further.

DigitalPrincxss was born on 17 January 1997. She stepped in at age 24 in 2021 when her arrest records for neglect of a child surfaced.

She is of the Capricorn zodiac.

DigitalPrincxss’s real name is Maririssa Alika Cloutier. She was booked in Lee County, FL with her real name for neglect of a child.

As of 2021, DigitalPrincxss resided in her hometown Denver, Colorado. She came from a family of five. Her father traveled every week for his job, while her mother lied in bed because of sickness. Besides her two parents, she also has two older brothers who are close to her. But, DigitalPrincxss rarely got to meet them.

DigitalPrincxss had previously stated that her mother was sick for over 10 years.

Reportedly, while DigitalPrincxss was in custody, her mother was called onto the scene to take care of her son.

Mentioning her distinct features, DigitalPrincxss has naturally dark hair that she often liked to multi-color, and a body covered with tattoos.

Did you know: DigitalPrincxss previously went by the name “Pokeprincxss”. But she was forced to change her digital handle by Nintendo after she began selling merchandise using their goodwill.

DigitalPrincxss garnered a net worth of under $300 thousand by 2021.

In the world of social media, DigitalPrincxss is one of the successful names up. She is a Pokemon collector, social media influencer, gamer, or cosplay enthusiast. She debuted her career as a social media star and started making content at the age of 18.

DigitalPrincxss has amassed many loyal followers who she called her “best friends.”

During the start, DigitalPrincxss mainly posted over Instagram. But as her reach expanded and admirers added more, she started branching out to new mediums. According to her, some of her favorite content that she ever created was on Twitch.

She has also been officially invited to work at various anime and video game conventions. The last we saw her, she ran the booth for Boom! Studios at Denver Pop Culture Convention in June 2019. But life wasn’t always so forgiving for DigitalPrincxss.

When she was struggling financially, she also had to turn to prostitution to support her and her child. In fact, it was her venture into sex work that gave her a major boost at recognition.

DigitalPrincxss also has an OnlyFans @digitalprincxss. She charged $16.99 for a month’s subscription and $86.65 for six months.

The social media star’s priority in life has always been school. She has been an honor roll student ever since she was in 6th grade. Someday, she wants to fly out to New York City for college to study photography. And later, make way to CA to become a tattoo apprentice.

DigitalPrincxss’s described her baby father as “a guy who basically manipulated me into thinking he was my forever.” She never revealed his name. She also made claims that, because of him, she decided to have her son Onix in the first place.

DigitalPrincxss shared that all the time she was in a relationship with her baby father, she had “really bad insecurity issues”. According to the social media star, she cheated on her during and after the pregnancy.

DigitalPrincxss has been a single mother looking after her son at least since 2019.