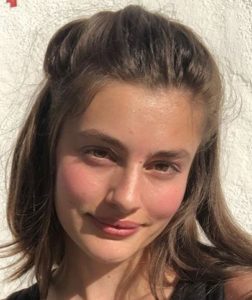 Booksmart, Olivia Wilde’s 2020 coming of age flick, was a revelation — a breath of fresh air in the long line of movies about high school students. As good as the main characters were, it was the array of rich, layered secondary characters that made the film stand out.

One of the secondary characters was Hope, a silent and adventurous high school girl. And it was Diana Silvers who realized the exotic Hope with great skills and grace.

Read the article below about the up and coming actor who has already shown her acting skills in Booksmart.

Diana Silvers was born on 3 November 1997. Likewise, she celebrated her 22nd birthday on the 3rd of November of 2019.

Diana was born as Diana Margaret Silvers to a psychiatrist father (whose name remained unknown) and an architect mother called Christina Staehelin Silvers. Her parents were from different ethnicities; her father was a Jewish American and her mother was Swiss.

Growing up, she had five siblings, three older brothers, one older sister, and a younger sister. The youngest of her siblings is the singer Ray Silvers.

Also, Diana attended New York University and majored in history with a minor in film.

Diana stands at a very tall height of 5 feet 10 inches and has an average weight of 54 kg. Based on the sources on the web, the measurements of her shoe size was 9.

Most popularly, Diana was found to be similar to Taylor Hill. Similarly, some people also found her similar to Julia Roberts and Phoebe Tonkin.

Diana was very active on social media. Her Instagram presence was significant with over 705k followers [Aug 2020]. 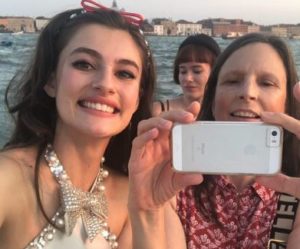 Diana Silvers taking it to Instagram to congratulate her mother on her birthday circa 2019 (PC: Diana’s Instagram)

She was very active on Twitter as well, with over 56.4k followers.

Diana’s first acting gig was Hulu‘s horror TV show called Into the Dark. 2019 was the big year for Diana with three of her significant movie being released.

The first was a minor role in M. Night Shyamalan’s psychological thriller Glass. Then she went on to appear on Olivia Wilde’s acclaimed coming of age comedy-drama Booksmart. Finally, her movie Ma, for which she had auditioned and selected when she was still in NYU, was released.

By the time, this article was written, Diana had a couple of TV shows and movies lining up to be released. She was cast as Erin Naird, one of the main characters, in the upcoming Netflix TV series called Space Force. Space Force also featured Steve Carell, one of Diana’s comedy idols, among the main cast members.

Still, in the infancy of her career, Diana Silvers had already amassed the huge net worth of $650 thousand.

As of early-2020, there was no real evidence of Diana Silvers dating any boyfriends. In one interview, however, Diana seemed to mention that she once had a crush on a boy, who influenced her towards loving photography. Although, if the said crush ever became the boyfriend was never mentioned.

By August 2020, rumors had romantically linked her to Dominic Fike. Some media outlets even went labeled the musician as Diana Silver’s boyfriend. The dating confirmation, however, hadn’t arrived yet.

While it is likely that Diana is a lesbian, or maybe a bisexual, it is not a fact. And about Alex Hainer, the two might only be very good friends.