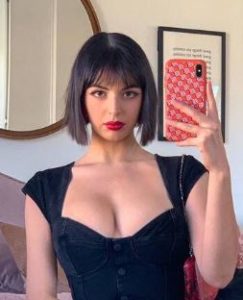 Singing the cult classic “Friday,” Rebecca Black transformed into an internet celebrity around 2011. Subsequent singles including “In Your Words” and “Sing It” brought her more notoriety.

Tag along as we uncover Rebecca’s dating life; her boyfriends and girlfriends. Furthermore, her biography shall unveil family background, net worth and life after going viral. Read till the end to learn about how Rebecca came out as a gay woman.

On 21st June 2019, Rebecca Black celebrated her 22nd birthday. She owns Cancer as a Zodiac sign. Furthermore, she was born in Irvine, California in 1997. Rebecca embraced mixed ethnicity — Mexican from her maternal side and English, Italian and Polish from the paternal side.

John Jeffery Black and Georgina Marquez Kelly are Rebecca’s biological parents. Both John and Georgina are veterinarians. In her family, she has a baby brother named Chase Black (b. August 25, 1999).

Encouraged by her mom and dad, Rebecca took to acting and singing at a young age. Upon going viral with “Friday” — dubbed one of the worst songs ever recorded — she left her school due to excessive bullying.

Unrattled with the hatred and backlash, Rebecca transitioned into a social media star. By Spring 2020, the American singer had accumulated 918k followers on IG and 1.1 million followers on Twitter. Meanwhile, her self-titled YouTube channel flaunted 1.46 million subscribers.

According to celebritynetworth.com, Rebecca collected $1.5 million from her numerous business ventures. Additionally, she pocketed a steady stream of income from paid partnerships post, endorsements and streaming revenue.

Back in 2013, Rebecca Black did a boyfriend challenge with a friend named Andrew for her YouTube channel. As a result, fans became frustrated with the singer’s decision to not them into her exclusive love life.

Rebecca was once romantically linked with fellow YouTuber Casper Lee. Unsurprisingly, neither she nor her rumored boyfriend acknowledged their suspected romance. Over time, the relationship rumors simply faded away.

To those in the dark: Casper Lee is a South African-British YouTuber. Three years older than Rebecca, he authored a self-titled book. Moreover, he owned 2.8 million followers on Instagram while garnering 7.3 million subscribers on YouTuber (as of April 2020).

At age 22, Rebecca Black finally opened about her sexuality. During her 2020 interview with the podcast titled “Dating Straight,” she came out as a queer. Rebecca — at the time, however — didn’t reveal whether she identified as lesbian or bisexual. Discussing her sexual identity, the singer shared:

“Every day is different, it’s something that over the past few years I’ve obviously been having a lot of conversations with myself about… and with you guys, my friends and my family.”

“I made a conscious decision to not like ‘come out’ but to just like, I don’t know, people started asking and I stopped responding. I’m still in the process it feels like.”

“To me, the word ‘queer’ feels really nice. I have dated a lot of different types of people, and I just don’t really know what the future holds. Some days, I feel a little more on the ‘gay’ side than others.”

Talking to hosts of “Dating Straight” Jack Dodge and Amy Ordman, Rebecca also divulged her recent breakup with a mystery girlfriend. She shared,

“I was dating someone and I know they might watch this… but one of the reasons that we went through this breakup was because I was really needed alone time, not from them, but just in general.”

Despite the split, Rebecca claimed that she was in a better place in life right now. Additionally, the famed internet personality shared she and her former partner looked out for each other. Because she was fresh off the breakup, Rebecca didn’t see herself navigating the dating pool anytime soon.