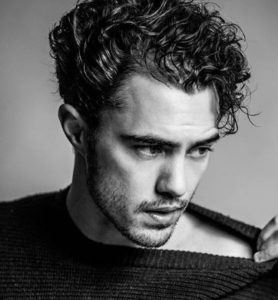 The long-awaited Netflix Original Never Have I Ever finally premiered on April 27, and there appeared Darren Barnet as the perfect boyfriend material. Taking on the role of half-Japanese Paxton Hall-Yoshida, Darren had captivated the fans with a good deal of shirtless scenes, showing off his ripped body.

While his character Paxton Hall-Yoshida might just look like another hot guy in the school, Darren explained that there was more to the character than that met the eye.

“Paxton is an aloof jock with a heart of gold and layers you might not see on the surface,” Darren further explained his character in an Instagram post.

Comming from the show, you may know Darren as Paxton Hall but stay along with the article to learn more about Darren’s real-life bio and his dating life.

Darren Barnet celebrates his birthday on April 27. In the Spring of 2020, the talented actor became 29 years old. Reportedly, he was born on 27th April 1991.

Corresponding to his birthday, Darren is of the Taurus zodiac.

Reportedly, Darren Barnet flaunts a mixed ethnicity [Japanese-American]. His mother is from Japan and his dad is Caucasian. Furthermore, he carries German, Swedish, and Cherokee Indian ancestry.

Darren Barnet was born and raised in Los Angeles, California alongside his siblings. He has two sisters, older than him @jenbarnet_rudolph [Jennifer Barnet-Rudolph] and his half-sister @emilyxbreanna [Emily Breanna]. Moreover, he loved his baby sister and was present along with his family for her graduation at the University of San Francisco in 2018. Darren, meanwhile, studied at Berry College.

From an early age, Darren always wanted to be an actor. He would watch one of his favorite shows “Sister Sister” and wondered how fun would it be to become of the cast. But his parents told him otherwise, both his mom and dad had pursued an acting career in their 20s’. So, they feared the rollercoaster life filled with rejection for their son too.

Understanding their perspective, Darren completed his school education at Dr. Phillips High School as his parents wished for. But the mindset of becoming an actor never left him. So he moved back to LA and as his first job, Darren worked as a front desk/bike attendant at Soul Cycle in West Hollywood.

The place was filled with celebrities and soon engaging with the regular clients, he got his way into Hollywood. Also, Darren got a chance to share the red carpet with Tia as a cast to Family Reunion.

This boy will steal your girlfriend. To mention Darren’s distinct features, he has beautiful brown eyes, and his triangular face shape complimented the messy hairstyle he preferred. Also, fans mentioned that his slightly raised upper lip was the cutest.

Darren Barnet’s net worth was estimated to be around $300 thousand in early 2020.

Digging into Darren’s dating life, we have sourced Darren to have had a girlfriend named Cassie in 2015. Allegedly, the duo was seen celebrating their over-a-year relationship at the Universal Studios. As of 2020, Cassie was already into another relationship, so it’s safe to say that the couple might have broken up or might have never been in a relationship too.

Adored by the gay community, Darren mentioned that his life had been full of ups and downs. And he was happy to have all his fans coming from different places. As for his dating life, Darren was unsure if he could manage to have a girlfriend with his busy schedule.

You may like – Dharon E. Jones Wiki, Age, Dating, Movies, Net Worth, Bio