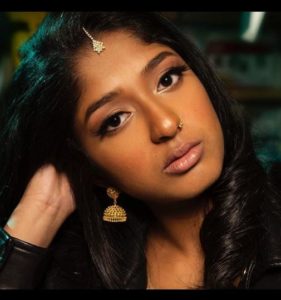 Netflix premiered its teen-comedy series titled Never Have I Ever on 27 April 2020. The show was the offering of Mindy Kaling, an American comedienne, and a cast of The Office. Never Have I Ever explored an Indian-American teenage girl dealing with everything an average American child would deal with and more. Maitreyi Ramakrishnan, the lead actress played the part of Devi in the show. Maitreyi though she wasn’t a stranger to performing surely was a new experience for her. The role of Devi was her on-screen debut.

This wiki-article was built around the life of Mairtreyi. So delve in to learn more about her.

Tamil-Canadian actress Maitreyi Ramakrishnan was born in 2002. Furthermore, she was 18 years old at the time of penning this piece based on her life.

The TV show actress attended and graduated from Meadowvale Secondary school in Canada. She was also accepted at York University to major in the theatre but she deferred the program to shoot Netflix’s TV show.

Maitreyi was born and raised to her parents in Mississauga.

Her father worked as a Canadian government official, while her mother Kiruthiha Kulendiren, an expert in marketing communication. Besides that, almost no further information on her family has been shared at the time.

More on her family, the actress inherited Tamil-Canadian ethnicity from her refugee parents. They fled from Srilanka to Canada during the time of the civil war that had happened.

Talking about siblings, Maitreyi mentioned having an older brother. But, like her parents, no information has been spared including his name as of April 2020.

Maitreyi Ramakrishnan stands at a height of 5 feet 3 inches (1.6 meters) and approximately weighed about 51 kilograms (112 lbs).

Growing up in a South-Asian household, she opted on having ears and nose piercing following the tradition.

Within a very short period of rising into fame, she earned an attractive number of followers on her social media platform. Her self-titled Instagram account boasts a total of 81.1k followers.

Maitreyi never paced for a career in entertainment to start.

However, her high school drama teacher played a considerable part to start her acting career. Maitreyi’s teacher inspired her to join the after-school theatre program. The school’s production of Footloose was her theatrical debut.

And eventually, what started as a fun thing to do wounded up becoming a promising career for her.

The actress vigorously performed in the after school musicals. After graduation, she had already planned to enroll at York University.

However, Mindy Kaling’s tweet on an open casting call for the show ‘Never Have I Ever’ changed everything for her. Maitreyi and her best friend both auditioned for a part on the show.

After a few audition sessions, a screen test, and a chemistry test, she got a direct call from Mindy to play the part of Devi in the series.

Eventually, Maitreyi moved to Beverly Hills in a family friend’s home to shoot the show, and after that everything was history.

As of April 2020, Netflix’s Never Have I Ever was her TV show and career debut. Because of the gig, Maitreyi Ramakrishnan’s net worth rocketed beyond $50 thousand.

As open as she could be, Maitreyi avoided divulging facts on her private life. And among all the info people have searched for, her relationship status was a matter of concern for many of her fans.

On the same topic, Maitreyi Ramakrishnan seemed single and not focused on dating anyone at the time (Spring 2020).

Canadian Actress Mindy Kaling Netflix Never Have I Ever