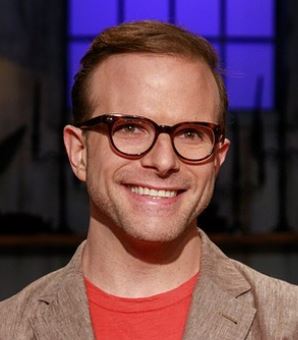 Zac Young is the star of Top Chef: Just Desserts (2010) who made it to the semi-finals of the competition. Also, you might know him from his judging skills at Nailed It! (2018) and Chopped Sweets (2020).

This talented pastry chef will please your sweet tooth not just with his cooking skills but also with his hilarious sense of humor. For those of you who know him, Zac is an amazing guy and will crack you up with his funny costumes and punchlines.

Here is everything u need to know about Zac.

Corresponding to his birthday, Zac is of Scorpio zodiac.

He grew up in Portland, ME where he attended Breakwater and Waynflete schools. Later, he graduated with a high school diploma from Walnut Hill School for the Arts. Also, he educated himself at the musical theater at the Boston Conservatory before moving to New York.

Furthermore, he was a student at the Institute of Culinary Education for the backing and pastry arts program.

As for Zac’s parents, their names are Susan Lebel Young (mother) and Jonathan Young (father). Reportedly, they lived in Falmouth.

Fun fact: his mother, Susan was a food diet conscious and labeled herself as “mostly vegan”. She found it funny how her son ironically now worked with butter, sugar, and white flour daily.

Also, Zac’s grandmother was a talented cook as well.

Information on his siblings wasn’t found.

How Tall Is Zac Young?

Zac Young’s net worth was estimated to be around $2 million in 2020.

As for his career, he is a pastry chef who was named one of the Top Ten Pastry Chefs in America 2015 by Dessert Professional. He trained in France with Philippe Givre at Valrhona and Philippe Parc at Chocolate Michel Cluizel.

Known for his playful taken on American desserts, Zac’s passion for cooking was showcased on Food Network’s shows like Beat Bobby Flay, Chopped, and Worst Cooks in America.

Furthermore, Zac was the owner of Craveable Hospitality Group. Also, he was a Partner / Executive Pastry Chef of the David Burke Group.

According to his Linked profile, he gathered his experiences by working as a Pastry Chef at Butter restaurant from 2006 – 2009 and Flex Mussels from 2009 – 2012.

But before he found he calling as a chef, Zac tried his luck with the Broadway. Reportedly, he worked in the wig department of the Radio City Rockettes for a while

Yes, Zac Young is openly gay and has made a career out of it.

But, life wasn’t always so forgiving for him. Zac confessed that he was “tormented for being fat and gay” in the past.

However, Zac was determined to do something in life. He blocked the haters, remained true to himself, and reached for his passion. Also, he is an inspiration to many gay people who are struggling to fit in society.

In 2010, he was in a relationship with a guy who finally asked him out after nine years of friendship. Unfortunately, Zac’s boyfriend’s name wasn’t mentioned and it is unclear when they exactly broke up.

Similarly, he mentioned a boyfriend in 2017 who was; in his words, “loving and very understanding techie boyfriend.” But this time too, he didn’t share much about him.

As of 2020, Zac was silent about his dating life. It might be that he already split with his boyfriend from 2017 or that might not be the case either.  Also, Zac didn’t post anything related to his boyfriend over his social media before 2020. He liked to keep his love life away from the fans.

Just in case you are wondering, Zac wasn’t married and didn’t have a husband reported at the time of writing this article.

However, Zac did share a son (dog) with Andy Rusch and named him Pippin Rusch-Young. That made both Zac and Andy the fathers of Pippin. So, does that make them husbands as well?

Meet Jason Schanne is a name that was on the limelight for being the partner to ABC’s Dancing With...