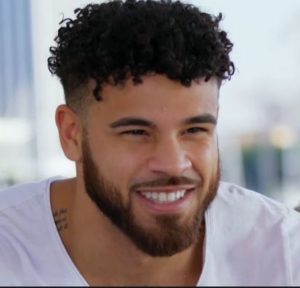 The Teen Mom OG star Cory Wharton posted a hilarious TikTok video on Instagram on March 14, 2020. Going along with the trend, he participated in the Flip the Switch challenge along with his daughter and girlfriend.

Cory mentioned, “We are all basically quarantined for who knows how long.”

Staying indoors with the fear of coronavirus, there was no better time for Cory to join the TikTok community. He also promised that the videos would get better in time.

With his second baby on the way, Cory was happy to share his journey with all of his admirers.

Learn more about what happened to Cory Wharton’s twin baby and his wife as the article unfolds.

Growing up in Grand Rapids, Michigan, Cory once shared he didn’t have a father icon growing up since his dad was incarcerated most of his childhood.

Admittedly, Cory’s parents had to endure a lot of hardships. he recalled after his father was out of jail, they had a good talk as they reconnected.

In early 2019, to make up for the lost parenthood, Cory’s dad was on the way to meet him and make things right. 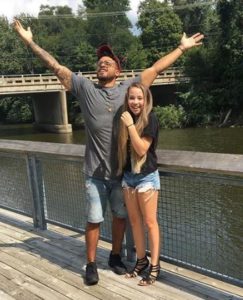 Cory Wharton along with his little sister

Diggin up about his siblings, Cory mentioned in his Instagram post that his little sister was “growing up, on him.”

With a passion for sports, Cory enrolled in Ohio Dominican University where he studied sports management. He then went to Grand Rapids Community College for almost two and a half years.

As a fitness enthusiast, he has worked at Equinox and also a personal trainer. But he was tired of his job and decided to audition for the famous TV show, The Real World: Ex-Plosion in 2014.

After a year, Cory joined the TV show The Challenge: Vendettas. He couldn’t quite make a name there as he was eliminated early on.

In 2020, Cory was also added to the cast of the MTV reality series, Ex on the Beach. He made it to the trending list from the show as he was stuck in the middle of the confrontation between Alicia and Taylor.

Cory Wharton was always super paranoid about his teeth.

Therefore, he booked an appointment with a dentist after his 28th birthday to get them fixed. But his fans were disappointed with the results.

Adding insult to injury they wrote,

In April 2020, Cory Wharton and Taylor Selfridge welcomed their first bundle of joy. Via IG, the “Teen Mom” shared,

However, Cory — at the time — didn’t share the name of their baby daughter while delivering the good news. 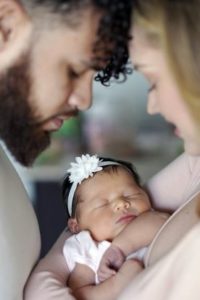 Cory Wharton and girlfriend with their daughter (Pic – Cory’s IG)

At the time, Cory added that it wasn’t planned for, just like his first daughter Ryder. But Ryder was the best thing that happened to him and he was excited for his new child. 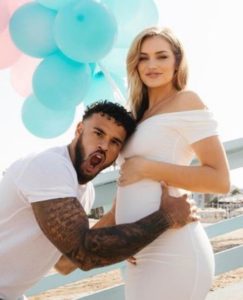 The doctors reported that Cory and Taylor were supposed to have a twin. But Taylor was a victim of the Vanishing Twin Syndrome and lost a baby. Taylor was disappointed that people were naming it a miscarriage and felt guilty.

In light of their pregnancy, the rumors floated around about Cory, and Taylor could get married.

Cory addressed the rumors claiming he hadn’t asked her to marry yet but might soon pop the question. They were in preparation with move in together at the time.

Cory and Taylor held a special gender reveal party with the gathering of their loved ones including Ryder’s mama Cheyenne Floyd.

They seemed happier than ever as the poppers rained down Pink. Cory was gonna be the father of two daughters.

You may like – [Vanilla Ice’s Ex] Laura Giaritta Wiki, Net Worth, Dating

Cory Wharton once enjoyed a blissful dating life with The Challenge: Rivals III co-star-turned-girlfriend and Ryder’s mother, Cheyenne Floyd in 2016. However, they both lacked the commitment for a long term relationship and soon split up.

As seen on the show Ex on the Beach, Cory had a former girlfriend named Alicia Wright. But soon he began to lean towards Taylor which sparked a drama between the triangle.

Reportedly, Cory was also dating his co-star Alicia Lavida from the show The Challenge: Vendettas.

But, we never got to see more of them as they were eliminated early on.

A multi-talented girl from Britain, Melissa Reeves was a frequent mention in the headline in media. Whether...