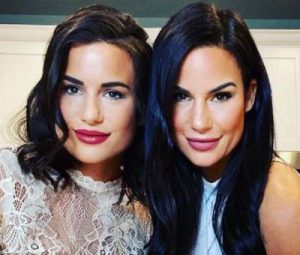 Christina Manning uncannily went through all the major life events at the same time with her twin- sister Jessica Dunagan. Also popularly known as the “Psychic Sisters”, they got married, were pregnant, got married, pregnant, and went through their divorces around the same time. No doubt they ticked off all the boxes to be on the TLC show Extreme Sisters.

Below is this Christina Manning wiki, one-half of the utterly yet unapologetically ‘extreme’ siblings.

‘Manning’ being her married name, she was originally ‘Christina Brown’.

Christina’s parents have long been divorced. So, her mother raised her and her two siblings alone, as a single parent.

Besides a look-alike twin sister, Christina has an older half-brother, Justen Brown.

In 2020, Christina wished their late mom (died of cancer) the happiest birthday, writing— “Happy Birthday to a brave single Mom who raised two baby twin girls to grow up & be independent ass kickers like her! #missyoumama😘❤️”— to a very old throwback picture of them. 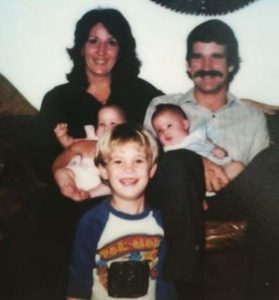 In the picture: Jessica, her twin Christina, their parents, and older brother (PIC: Christina’s IG)

Below, in the comment box, Christina explained, “The babies are my sis & I… and half brother in front… Mom & Dad”, mentioning ‘dad’ likely for the very first time.

The absolute carbon copy of one another, Christina Manning even stands to a similar height i.e. 5′ 3″ as her womb mate.

With more than 14 years of life coaching expertise with their “natural born” Reiki healing ability, Jessica and Christina stated to have helped thousands of clients over the entire globe.

Their website further reads: the Brown sisters have traveled and shared the same passion, touring speaking engagements and appearing on radio.

They were both enrolled in nursing school but their illness (when they were 18) hindered those plans. During their journey back to health, they started to become more aware of their “gifts”.

Together, they also published a book: Charge Your Food, Change Your Life, a cookbook filled with information on reiki, manifesting, and food habits.

Not to miss, they also provide love and life coaching services. Interested?

You may log into christinamanning.com for the likes of “21 – Day Manifesting Course to Attract Love” online courses amounting to $39.99.

And, in the meantime, Christina Manning, like Jessica, had collected almost $400K net worth, possibly before she took her very first salary from TLC.

Unlike the other twin, Christina Manning was involved in multiple social media platforms. Her profiles were visible on Facebook, Twitter, as well as Instagram. Even so, like her sister she was still not trusted upon by many followers.

Christina Manning is equally the mother to Jessica’s two kids as she is to her only 5-year-old. She has a boy while her sister has a boy and a girl each.

So, both the sisters have been pregnant two times. Had Christina not had a miscarriage with her first pregnancy, they both would have two children.

Christina Manning’s former husband is Tristan Manning. It seemed she and Tristan managed to put their differences aside to become the best parents they could be to their only son. 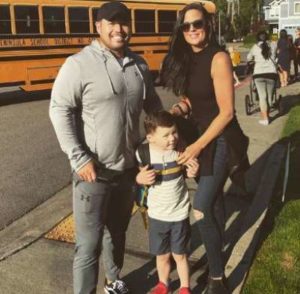 Christina Manning spotted with her ex-husband and their son (PIC: Christina’s IG)

Back in Sep. 2019, Christina’s followers on Insta saw her with her ex. during their son’s first day at school. She had captioned the memory writing—”❤️ Proud Parents!!! Our hearts are full!”.

Just like the other sibling pairs (Anna and Lucy DeCinque, Brooke and Baylee, Brittany and Briana Deane, and Patrix and Patrica) featured on the show, Christina Manning and her twin too allowed their obsessive closeness to come in between their love life. Both, in fact, admitted even their ex-husbands felt that way.

Anyway, Christina at the time of this writing had moved from her separation and was dating boyfriend John Zloty. 24-year-old and Indiana born and raised, he is a Sonar Technician at US Navy. Now and then, Christina shared memories of him on her Instagram. 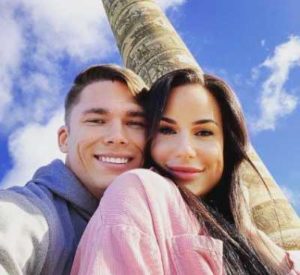 Anyway, the romance does not go back to old times. Instead, they have been seeing each other only since at least Dec. 2020. But then again, in those short span, John already seem to have formed even pretty well bonding even with Christina’s kids.