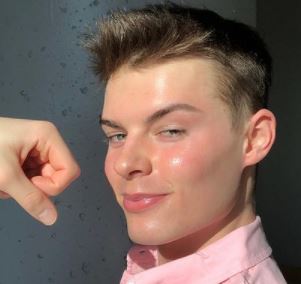 Like always, Sports Illustrated Swimsuit held its annual model search (but this time virtually due to the coronavirus pandemic). And while the group of finalists had always been female, Lewis Freese broke the norm, being the first male to enter the top 15.

Here is a wiki comprising everything we know about him.

Competing amongst the fresh faces and established models alike, Lewis Freese made it to the top 15 in Sports Illustrated Swimsuit model. He was still awaiting results to be amongst the top 6 who will be selected to be in the magazine!

As for what inspired him to enter, Lewis confessed he was dealing with a lot of confusion about his “identity, gender,” and where he was heading to. So, since Sports Illustrated Swimsuit always led the conversation of “inclusion and diversity,” he thought it might be a good platform to bring the “discussion” there.

Furthermore, it was ironic that Lewis chose the “swimsuit” competition as it has been the downfall of his confidence in the past. But he was set on normalizing the concept of “gender and sexual fluidity”.

Trivia: Since, Lewis a state that only has 3 months of swimsuit weather, he only owned about 3 or 4 swimsuits.

Overall, many Sports Illustrated Swimsuit fans weren’t pleased with Lewis’s inclusion as the finalist. However, some approved the change.

Lewis Freese was 21 years of age as he made history as the first male Sports Illustrated Swimsuit model.

Unfortunately, details on his birthday and zodiac weren’t shared.

Born in Cleveland, Lewis Freese only spent the first 5 years of his life in his hometown. Then he moved to Minnesota along with his family that included his parents, and two elder siblings (a twin brother and a sister).

Recalling his time with his family, Lewis shared a moment when he first explains the concept of gender to his family. He said,

“When you walk into an ice cream shop you’re never presented with just chocolate and vanilla, but there are tens if not hundreds of flavors. In my opinion, that’s how gender can be thought of. The variations are truly endless and gender stretches far beyond what we are born to believe.”

Also, he added that he was born into “the most accepting loving, and caring family.” His parents, brother, and sister never assumed his sexuality, and always used “partner” to address their significant other.

In light of his education, Lewis was “designing” his major consisting of “business marketing, gender women sexuality studies and retail merchandising”.

Mentioning his distinct features, Lewis has a fine jawline and blue eyes.

As of April 2021, Lewis entertained 2K followers over Instagram @lewisfreese1. Every picture then featured stunning pictures of him.

His Net Worth, Career, Job

Lewis Freese’s net worth was under $100 thousand in 2021. He had yet to start his career and was a full-time student then.

As for his ambition, he someday hopes to own a business promoting or creating gender-neutral products. Also, he wanted to get a job in the legislative sector that revolve around trans, queer, and nonbinary reform to improve the community’s accessibility to safety, health care, housing, and education.

But as of 2021, he had his eyes set on the cover for Sports Illustrated Swimsuit and hopefully become a professional model someday. Talking his first step, he was already working with Community New York then.

If you could go back in time and teach himself one thing, Lewis said that he would till his younger self “not to focus on his flaws as much as he did.”

Lewis Freese never used the word “gay or bisexual” to describe himself. He said, “sexuality is so much more than a title”. Moreover, he didn’t like the fact how people “easily assumed” someone’s sexuality.

As for his sexuality, Lewis preferred to use the term “not straight”. He added, “I do not consider myself to have specific sexuality and I never will.” And the reason for this was because Lewis felt like he fell under “multiple gender identifications” and was “struggling” himself to know who he was.

For pronouns, he preferred “he/they”. Also, he felt like just one set of pronouns made him feel “limited”.

Interested in his coming out story? Well, it wasn’t a one-time thing. He first let his siblings know, then his mom, and finally his dad. But to open up to his father was the hardest. After mind-boggling for weeks, Lewis finally decided to tell him on a Saturday night. He said, “Dad I need to tell you something…. I like guys.”

To which his father replied, “Lewis I love you”.

As of 2021, it was unclear if Lewis Freese was dating or single. He was still exploring his sexuality, and maybe we’ll hear about his partner when he finds himself.