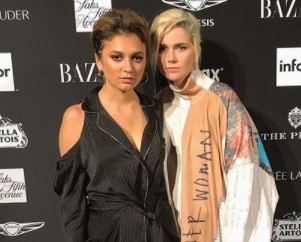 Continue scrolling this Clyde Munroe bio and discover details about Daya’s girlfriend including her age and job. Also, read about her Instagram, family, and height.

On her 23rd birthday, Daya shared a photo of them on Instagram and captioned it— “happy bday baby 👩‍❤️‍💋‍👩👑🗣most special person I love u forever”

Clyde hails from Fox Chapel, Pennsylvania. By 2021, she had relocated to Los Angeles, California.

Willis Munroe, Devin Munroe, Finn Munroe, and Elana Egri-Thomas are some of Clyde’s known family members. Reportedly, she had 3 siblings including Willis.

Measuring a little above 5 feet 7 inches in height, Clyde is only an inch or two taller than Daya.

A natural brunette, Clyde later dyed her hair blonde. At one point in her life, she even got a buzz cut.

And based on her looks alone, Clyde could easily pass for a model.

Although Clyde had a Facebook profile, she had long stopped posting on it. Elsewhere on Instagram, Clyde enjoyed around 10.3 thousand followers.

Clyde is a photographer who mostly works with musicians. Perhaps, she met her future girlfriend, Daya through work.

Based in LA, Clyde also boasts several titles including that of a creative director, graphic designer, and editor.

According to her website, Clyde’s work has graced the pages of prestigious publications such as The Fader, Billboard, Complex, Rolling Stone, Hypebeast, NME, Refinery29, Pidgeons & Planes, and Flaunt.

In October 2018, on the occasion of the National Coming Out Day, Daya came out as bisexual via Instagram. By then, she and Clyde had been dating for several months.

Clyde first appeared on Daya’s Instagram in the Summer of 2018. The couple celebrated their three years together in the Spring og 2021.

Daya released a Clyde-inspired record titled “Bad Girl” in March 2021. A month later, the singer revealed that her girlfriend of 3 years was the inspiration for the song. In her own words— “For those wondering who I wrote this song about, this is Clyde. We’ve been dating for 3 years now. She’s my best friend and my whole world. I’m so lucky.”

A little info about Daya— Born in 1998, she is a native of Pittsburgh, PA. Also, her real name is Grace Tandon. With the 2015 single “Hide Away,” Daya rose to stardom.