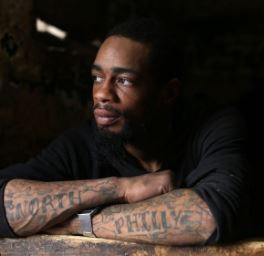 Jamil Prattis is the new face of the Netflix movie Concrete Cowboy. But unlike all the other actors, Jamil is a real deal in the movie, a real Concrete Cowboy from Philadelphia. He starred along with iconic figures like Edris Elba and Method Man and still managed to grab the attention of other the viewers playing the character Paris.

Scroll down this Jamil Prattis wiki to learn more about his career and character in the show along with other details.

Jamil Prattis is one of the original Concrete Cowboys stars on Netflix’s movie of the same title. The movie was adapted from the book Ghetto Cowboy by author G Neri. In the movie, he plays the role of Paris who belonged to a group of Black horseback riders in North Philly.

In the movie, Jamil mentored Cole, a boy from Detroit who moved with his estranged father in Philadelphia after he got in trouble at his school. Jamil, whose story has been shared repeatedly in print media in the past, now stars in a movie himself.

Even though Jamil had zero experience in the movie industry, he didn’t hesitate to take on the opportunity that rose where he could actually star in the movie. Hence, we’ve got Paris in Concrete Cowboy.

Does Jamil Prattis (Paris) Use Wheelchair?

Jamil Prattis, an actor, has no shortcomings in his physical wellness. He stands tall at 5 feet 11 inches (1.80 meters) and weighed about 81 kilograms (178 lbs).

But, the character ‘Paris’ which Jamil portrays in the movie suffered from the case of Paraplegia. And as we know the people with this health condition endured impairment in motor or sensory function of the lower extremities.

In the movie, Paris told his apprentice Cole about the altercation that shattered his spine. The story was one of the moments that helped define Cole’s path in his life.

This is why Jamil’s character in the movie is wheelchair-bound.

Riding horses and tending them were the two things Jamil Prattis knew best in his life. His love for horse riding sprouted at 11 years old when his cousin taught him for the first time. His first horse was a 12-year-old thoroughbred named Lady Tracey.

But even after his horse died in 2013, his love for horse riding stayed intact. This made him rear more horses. Not only that, but he also took care of the horses of other owners to pay for his needs and his horses.

Horses taught him many things in life. Responsibility, making good use of resources, about life and death, he learned about it all watching the horses. But most importantly, horses gave him a career he probably never dreamt about.

The Philly-based actor Jamil Prattis has no proper training and no prior experience in movies. Still, he dazzled producers and directors of the Netflix movie. The movie was entirely filmed in the neighborhood he spent most of his life in.

Since the movie received rave reviews from fans, Jamil’s reputation thrived even more.

More From Us: Will Matthiessen Wiki: Lexie Hull’s Boyfriend, Age

In 2017, Emily Anne Epstein of The Atlantic shared several photographs from photographer Ann Sophie Lindstrom shared. One of the pictures was from October 2013, when Jamil was 25 at the time.

As of April 2021, Jamil was 31 years old but he never shared his precise date of birth.

What Happened To His Brother?

The Director of Concrete Cowboy wanted Jamil to share his real-life story regarding his brother. And as he shared in the movie, his brother and him (Paris) got in an altercation that took his brother’s life.

The story was picked from the life story of Jamil Prattis. But, he never publicly delved into details about what happened in Jamil’s brother. He only gave away a hazy idea about something terrible that had happened to him but not exactly what went down that took his life.

Coming to social media reach, Jamil is on Instagram with 728 followers where he followed 155 people on the platform. Likewise, he was also on Facebook where he hasn’t posted anything since November of 2019.

As wrote and shared, Jamil Prattis has at least one daughter who he mentioned in 2018. At the time, she was 11 years, just about his age when he first started learning horse riding.

His kids basically grew up around the stable watching his father take care of his kids. However, he never shared details regarding his daughter and his wife. Jamil Prattis told Philadelphia Neighborhoods,

Furthermore, Jamil never shared further information about his life as a married man.