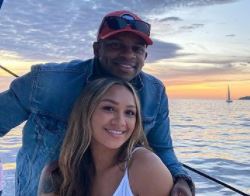 Alexis Gale first gained fame as the girlfriend of Jimmie Allen. As of April 2021, she had yet to become the country musician’s wife. At the time, Alexis was reportedly still his fiancee. However, by May that year, she officially became Jimmie’s wife.

Join this Alexis Gale wiki as we uncover facts about Jimmie Allen’s wife such as her nationality, age, and parents. Furthermore, read about her net worth, job, and height.

In early 2021, Alexis Gale reached the age of 25. His birthday, meanwhile, falls on 6th January. As such, he is a Capricorn and boasts definitive traits like adaptive, charming, and hardworking nature.

Alexis Gale is a native of Milton, Delaware; making her nationality American. However, as of 2021, she was residing in Nashville, Tennessee. Meanwhile, as for her ethnicity, she reportedly inherited part Asian bloodline from her mother’s side of the family. 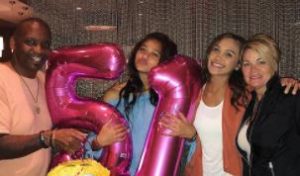 Alexis Gale with her parents and sister (Source: Instagram)

Tyrone, Alexis’ father, is the president of the company called Atlantic Transportation. What’s more, he drove A-list celebs in the past in Delaware.

In 2014, Tyrone made headlines as the Mercedes Benz Sprinter driven by him and carrying the likes of Tracy Morgan and James McNair was hit by a Walmart trailer. While Tracy survived the accident, James McNair did not.

Although Tyrone sustained physical injuries, he experienced further stress because of the state of the company. Over time, the father of two overcame PTSD thanks to everyone including the chauffeur ground transportation community.

Following the accident, Tyrone underwent weight loss surgery. What’s more, Alexis had encouraged him to do so. At one point, he was almost 400 pounds.

Alexis Gale stands above 5 feet 6 inches in height. For context, she is only a couple of inches shorter than her partner, Jimmie Allen.

Also, Alexis’ distinct features include her beautiful caramel skin and a fit body. Similarly, her weight hovered under 53 kilograms in 2021.

Thanks to her romantic association, Alexis commanded a respectable social media following.

Until May 2021, Alexis had 11.4K followers on her IG @lexmarieallen. While she kept her Facebook private, the Delaware native didn’t seem to on Twitter.

Holding the job of a registered nurse, Alexis Gale enjoyed more than $300 thousand net worth.

Between February 2015 and June 2016, Alexis served as the licensed esthetician at the “Zen Spa Fenwick”.

Moreover, on the About section of her LinkedIn, Alexis wrote— “With 1,080 clinical hours completed and successful completion of the NCLEX exam, I have developed confidence in therapeutic communication, assertiveness, critical thinking, and professionalism. Along with those interpersonal skills, I am First Aid, BLS, and CPR certified through American Heart Association with the plan to complete ACLS certification. ”

Opening about their hometown connection, Jimmie once said: “With Alexis being from my hometown, it is like always having a piece of home with me. We had an immediate connection. It was like we’d always known each other.”

In the Summer of 2019, following less than a year of dating, Jimmie popped the big question. Alexis, without the slightest bit of hesitation, accepted the proposal.

Alexis gave birth to their first child in March 2020. She and Jimmie named their firstborn, Naomi Bettie Allen. With Naomi’s arrival, the country musician became the father of two kids. From his earlier romance, Jimmie has a son named Aadyn.

Back in November 2019, Jimmie hinted at a summer wedding. He told PopCulture.com— “It’s not going to be in Disney World. It’s going to be in the Northeast. I don’t like fall weddings. I’m a summer guy — if it gets under 60 degrees it’s too cold for me.”

By April 2021, Alexis had changed her username on Instagram to Lexi Marie Allen. Perhaps, she and Jimmie tied the knot in 2020 but opted not to share the news with the fans. It would explain her adopting the singer’s last name for IG.

Alexis and Jimmie finally shared the wedding vows on 27th May 2021. The guests at their wedding included Darius Rucker, Tyler Rich, and Chuck Wicks. As shared by E! News, they had postponed their original wedding date because of COVID.