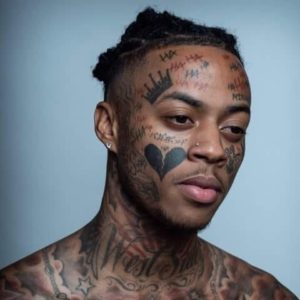 Face filled with tats and reckless behavior; that’s what it takes to be a “menace to society.” But social media viral personality Boonk Gang don’t seem to care at all.

He made videos of him robbing stores, smashing women, and dropping misogynistic captions on it and several other activities. Still, people found it entertaining.

As a consequence, it garnered him a handful of followers over several social media platforms.

Making headlines his way in this world over the content might’ve been his strategy. But, he seemed to have met his fall nevertheless.

No matter what, we couldn’t ignore him. Here are some of the wiki-related facts about the Boonk Gang.

Boonk Gang’s real name is John Robert Hill Jr. He once claimed that the name “Boonk” was given to him by his mother. Circa 2019, he adopted the moniker John Gabbana.

He was raised by a single mother named Simona Ariel. His biological father John Rober Hill Sr. was never there to start with. It was Boonk’s step-father Dirk Marshall William Jr. who stepped in and looked after him.

Brought up with 14 siblings – 6 of them on his mother’s side and 8 on his father’s – Boonk used to get in a lot of trouble even back when he was young.

His antics resulted in his mother’s frustration and psychotic behavior.

For a person who was abundantly active in social media a year prior, Boonk was surprisingly low profiled in 2019. Because of his disappearance, fans started speculating that either Boonk was dead.

But, he wasn’t. In 2019, he returned to social media as a changed man. Claiming to be off the drugs, he promised to take music seriously and even adopted a new stage name as John Gabbana.

The change in attitude, however, wouldn’t last that long. July that year, he tried to pull off another act of hooliganism.

The incident led Boonk to lose a few of his teeth and suffer a broken lower jaw. However, it was not his first-hand encounter with a life-threatening event. Boonk uploaded a post on his IG page with the caption, 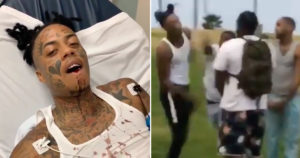 Back in July 2018, he got shot twice. He had to be hospitalized and undergo treatment to recover from the injuries sustained.

How Much Is Boonk Gang Net Worth? Songs & Video Game

Boonk gained an immense number of followers because of his publicity stunt. He gathered over 5+ million IG followers and 106k+ YouTube subscribers (as of September 2019). Due to the explicit content, Instagram even deleted his handle.

But putting his power to the right uses, Boonk dropped several singles like ‘#boonkgang,” “Bossed up” and many others. He longed to become an established rapper as a kid.

He wrote his songs and performed them. Boonk cites his earliest musical influences as Tee Grizzley,  YFN Lucci, and Tripple Redd.

On YouTube, his songs got over 4 million views (as of September 2019). Besides the milestone, Boonk dropped an album entitled “Gabanna Attack” in 2018 under the record label “Fyrehouse.”

“Gabanna Attack” featured artists like Lil Westside, Lil Shoski, and a few others. Its tracklist included “Chosen One,” “Does he do music or sumn,” “95 Ninety5,” and several others.

In his heyday, Boonk even got his own video game called “Boonk Gang: The Video Game.” It was released in September of 2017.

With all of his earnings from YouTube to albums, EPs & video games, Boonk’s net worth is estimated to be around $250k.