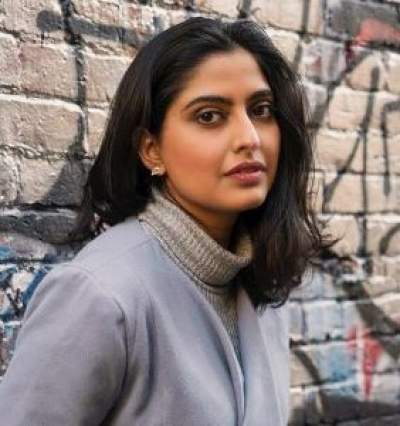 Canadian actress Aliza Vellani whom you might remember from the shows The Flash and Riverdale set to appear on a new Netflix project. Releasing on June 4, 2021, it is a fantasy drama Sweet Tooth that follows the life of hybrid deer-boy Gus in the post-apocalyptic world and Aliza of course has an as much prominent role (of Rani Singh).

So, before you find yourself binge-watching the new series here’s all you need to know about her.

Aliza’s parents immigrated to Vancouver, Canada from Tanga, Tanzania. For someone who was raised in an Indo-East African culture, Aliza explained her parents as more liberal than her teenage character of Layla Siddiqui’s folks.

Back in 2011, during an interview, Aliza revealed how as she got past her early years she has become more closer with my parents in terms of communicating, understanding, and accepting their differences.

Meanwhile recently (i.e. in 2019) she featured on a South Asian Lifestyle magazine together with her mom. The mother-daughter pair had adorned themselves in Indian wears.

More about Aliza’s tightly knitted family: Her mom lost her eldest sister and Aliza’s Tashu aunty (just a few months before Aliza’s wedding). In memory of the deceased Aliza had worn her aunty’s golden anklets on her wedding day.

Not to Miss, Aliza also has a sister, Sabrina Vellani. Just like Aliza, the younger sibling is also a BFA grad and seeking a career as an actor. (Trivia: Aliza studied BFA in Theatre at Simon Fraser University from 2009 – 2014.)

Aliza Vellani Ethnicity: Is She Indian?

Aliza was born in Vancouver, British Columbia, Canada. Ethnicity-wise, she is an Indo-Canadian.

Back in 2016, when sharing a memory from an Indian wedding that she attended in Mumbai, Maharashtra in India, Aliza had hashtagged herself as an ‘Indian girl’.

Aliza has also said her mother is not Indian but that her mother is just as much influenced by her ‘honorary Indian friend’ and her culture.

Aliza actually revealed in an Instagram post that her “big fat Indian wedding” is the outcome of a challenge she accepted from Sarah Lubbe, her same friend.

Aliza Vellani is not in any way related to the Disney+ series’s Ms. Marvel Iman Vellani. The only common thing they share is the surname Vellani and nationality. Both are Canadian actors.

Also, they were part of the same project. Aliza voiced ‘Ms. Mravel’ in 3 episodes of Marvel Super Hero Adventures.

Aliza Vellani — the former ambassador of the Vancouver Asian Film Festival — appears way taller than her actual height that is 5′ 2″ or 1.57 meters. Her the stunner’s latest bust-waist-hip measurements were recorded as 37-26-36 inches.

Aliza Vellani with credits including the series’ Little Mosque on the Prairie (CBC), The X-Files (FOX), and Marvel’s Super Hero Adventures (Disney+), had procured less than an estimated $750K net worth (until May 2021).

As an actress (and producer) based out of Vancouver with over a decade of work experience in the Film & TV industry both within Canada and the United States, she has been represented by Lucas Talent Inc.

Voluntarily a committee member at UBCP / ACTRA Office, she gained more such volunteering experiences in the past.

Further, Aliza is a co-vice president and director of Malabar Investments Corp. which is a Joint Venture Company that currently owns multiple Hotel properties across Canada.

Aliza Vellani’s Instagram is basically a walking talking proof that she is not only married but joyously married to her husband Jamshed Colah.

And although they tied the knots only on Sep. 12, 2018, their relationship goes back much back in time. They have been together since 2011.

Over heels in love with him, Aliza has never shied away from openly discussing her feelings for Jamshed. She fondly calls him — her love, life as well as the root of her laughter. Be it on their anniversary or his birthday, she would never miss a chance to come up with something like,

“Happy Birthday to the man I am lucky enough to call my husband. You are so incredibly talented, intelligent, kind and overall a beautiful human being. I cannot wait for what the world has in store for you @jamshedcolah. ♥️”

Except for expressing her feelings for him, Aliza never actually shared who her husband is. From what Jamshed’s Instagram says, he is a street photographer in Vancouver.