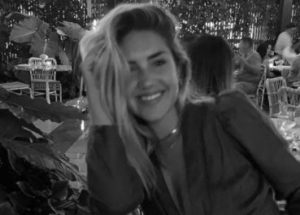 In June 2021, the TikTok star Tinx published a video where she updated her followers on how she had been doing. But by the end, the clip got all emotional as she revealed her “serious” relationship with her boyfriend had come to an end.

Delve into the world of Tinx as this Tinx wiki proceeds.

As per her birthday, she is of the Virgo zodiac.

What Is Tinx [TikTok] Real Name?

The social media star, Tinx’s real name is Christina Najjar. Her alias “Tinx” comes from her real name Chris-Tina; where you take the last syllabus of her real name and replace the last word with “x”.

Tinx might hail from London but she was born to American parents. According to Tinx, her mom and dad respected discipline and as a result, she was sent to a very strict, all-girls British school.

Unfortunately, while attending her high school (around the age of 13), Tinx started to develop anxiety and depression. Luckily, her parents noticed it quickly, took her to therapy, and encouraged her to be open about her struggles. Also, at the time, she suffered from a bad case of OCD. But her parents were “patient” with her.

Then, her family moved to San Francisco during her early 20s (for her to attend Stanford), and then to New York for her grad school (journalism at Parsons). That was also when Tinx’s anxiety peaked as she felt alone having left all her friends behind. “I felt very lost,” she said.

Eventually, Tinx found a brilliant Cognitive Behavioral Therapist, and since then things have never been better. As of 2021, she lived in LA, and was still seeing her therapist, to put “plan and boundaries in place.”

As for her siblings, Tinx has a little brother who lived in NYC.

Trivia: Tinx was still living in London as of 2021.

Mentioning her distinct features, Tinx has brown eyes, pouty lips, and perfect cheeks But it isn’t all-natural. Unlike many other influencers, she was happy to talk about her use of Botox. Moreover, she visited Sonya Dakar every couple of weeks to get cortisone shots for her breakouts.

Overall, Tinx believed that care was about balance and hinted at her diet as an example. She mentioned that she ate “ really healthy” — salads (80 percent of the time).

Visit here to learn all about her Amazon musts.

The self-described “amalgamation of all 5 Spice Girls”, Tinx is a TikTok star who was popular for her “Rich Mom Starter Pack” videos. Her contents broke down the necessities of so-called rich moms in various locales and instilled the idea that you really don’t need to be wealthy to be a “Rich Mom”.

So, how did it all start? Well, Tinx was obsessed with rich moms for many years. She said, “Rich moms are the most powerful, incredible species on earth because they get a lot of stuff done and they look amazing doing it.” Thus, she always used to do little funny, rich mom outfits over her IG, even before she was popular.

Finally, she moved on to TikTok, and it turned out that everybody was very interested in them. Thus, a new TikTok star was born.

Although her videos were satirical with a hint of sincerity,  Tinx claimed that her intent was never to be “mean or to mock”, rather it was “just to playfully make fun.”

Before TikTok, Tinx was working in fashion. She has worked for Gap Inc. and Poshmark. Reportedly, she made over $4 thousand selling random old stuff from her closet on Poshmark. But she later had to stop, as she was getting addicted to shopping and spent more than she made.

Apart from her time in fashion, Tinx was also writing articles for popular magazines like Teen Vogue, Pop Sugar, Modern Luxury, and Refinery 29.

Tinx might be open about many things but her dating life wasn’t one. It was no wonder that only after her break up with her “first serious boyfriend” Jeremy Kallen, Tinx first opened up about him. But a  few of her fans already knew that the pair was together.

Over the video (where Tinx shed light on her former boyfriend), she alleged Jeremy of cheating on her. Also, Tinx later clarified that she only got to know the truth about the man whom she wanted as her future husband, from “another girl” (probably his mistress).

“I was going to post a Vlog about how madly I was in love with my boyfriend, but today, I got a horrible message. If you have received one of those messages, you know exactly how it feels. You slowly read the words and you start to feel sick, and pray that it is not true.”

Also, Tinx asked her fans not to slam her former boyfriend, Jeremy online or send any hateful messages to him.