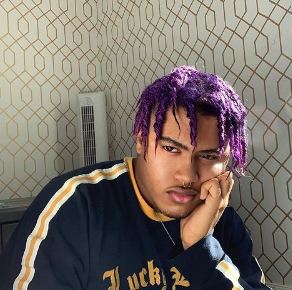 Ahmir Steward is best known as the former boyfriend of Jazz Jennings from TLC’s I Am Jazz. This eventually allowed him to star in the reality show. However, the couple ended up breaking up and he hasn’t been in public attention ever since.

Tag along to learn more about him and scroll down this Ahmir Steward Wiki to get updated on his dating status.

In one of the throwback pic of Ahmir which he uploaded on his IG, one of the IG users _.fancy13 asked him a question: Are you transgender? Ahmir straight replied to the user with one word, ‘Nope.’ However, he identified himself as non-binary and it falls under the umbrella of the LGBTQI+ community.

So, no, Ahmir Steward is not a transgender. But he does belong to the LGBTQI+ community.

Based on his social bio on his Instagram, Ahmir Steward was 21 years old as of June of 2021. He never revealed the real date of his birth. Because of this, his zodiac sign and his birthday remain obscure.

Ahmir Steward was born to his anonymous parents in Philadelphia, the United States. He kept details on his parents extremely low-key so, we don’t even have their names. But, back in 2019, Heavy had reported that his father lived in Fort Lauderdale and Ahmir had a place to stay when he was visiting Jazz in Florida.

As for Ahmir Steward’s mom, she is known among I Am Jazz fandom as a homophobic woman. From time to time, his mom has been vocal about her unacceptance of her son’s relationship with a transgender individual in this case Jazz.

Jazz had plans about confronting Ahmir’s mom, but she exhibited no interest in meeting a transgender individual.

Other than that, information on Ahmir’s parents remains obscure as of this writing.

Starting with Ahmir Steward’s height, he stands tall at 5 feet 7 inches (1.70 meters). Furthermore, he weighed not more than 68 kilograms (149 lbs).

Some of his distinct features are his pierced septum and his purple curls.

Talking about social media reach, Ahmir Steward is on Instagram with 19.6k followers as of June 2021. However, he only posted a total of 27 times on the platform. In the same way, he was also on Twitter with 57 followers. He only tweeted 24 times.

Furthermore, Ahmir also created a Facebook account. He was friends with only 46 people. He posted last time in April of 2021.

There exists a TikTok account with his name. The platform earned 213 followers but has zero posts. In conclusion, it couldn’t be verified whether the account actually belonged to him or not.

According to Heavy, TLC paid the reality star $10,000 per season. Taking that into consideration, it was highly likely that he was paid less than that sum. So, Ahmir Steward must have a net worth not more than $100 thousand in total.

Based on Ahmir’s Facebook, he enrolled at Maritime Academy Charter School in 2013. After four years there, he graduated from the school in 2017. Moreover, He also attended the Community College of Philadelphia. Furthermore, Ahmir enrolled at Salem State University to study Political Science and Government in 2020 to earn his B.Sc. degree.

Getting to Ahmir Steward’s job, he started his career by joining Philadelphia Wholesale Produce Market in October of 2017. He worked as a Packer for nearly 4 months and quitted his job to join TruMark Financial Credit Union. He started in the company as a member service and then left the company after 7 months of service.

In October of 2020, Ahmir started worked at Walmart for three months and quit his job. He also had plans about joining the Air Force but that didn’t pan out well.

Besides regular jobs, Ahmir also got the opportunity to start his career as a reality star. He joined TLC’s I Am Jazz in August of 2018 and has been starring in the show ever since.

It was Ahmir’s no plan on education and job, that made Jazz’s father Greg lose confidence in the Philly native. In past episodes, he even advised Jazz to rethink her relationship with Ahmir as he had no plans about the future.

Not only Greg, but Jazz’s friends also told her to take it slow with Ahmir for the same reason.

As TV Show Ace reported, Ahmir and Jazz met each other for the first time at a Philadelphia Trans Health Conference. The romance between the two first surfaced on the Internet in February of 2019. Jazz went through gender confirmation surgery when she was 18, it was right after her surgery she met her boyfriend Ahmir Steward.

Ahmir and Jazz when they were in a relationship (Pic: Jazz Jenning IG)

Ahmir had reached out to her online when he tagged her on one of his Instagram posts in West Philly. Then, they made plans when she was in the city. Whereas there is also a story about Jazz sharing her mailing address to her subscribers, and Ahmir reached out to her.

However, Jazz had previously shared that, Ahmir wasn’t the type of guy she would date typically. In Harper’s Bazaar’s 2016 essay, she shared about meeting a cute trans-boy who would be her true love or possibly her soul mate.

But, the two ended up breaking up with each other in April of 2019. In April, Ahmir also went on his Instagram and hinted at his breakup. Ever since then, he doesn’t seem to be dating anyone.

More From Us: Nathan Webb Wiki: Too Hot To Handle, Age, Height, Job