The Voice (America) got interesting in 2021. With only the finale to air, four incredible vocalists, Rachel Mac, Cam Anthony, Victor Solomon, Kenzie Wheeler, were set to battle out for the top spot. In this article, we shall cover one of the four, Victor Solomon.

Get to know this Victor Solomon wiki and his The Voice journey in the article below. You will also get to know about his parents as well as his current and former girlfriends.

Victor’s journey in The Voice started on 1st March 2021, when he sang John Legend’s Glory and three of the four judges turned their chairs. However, his journey to The Voice started when he was six and started to sing at church. His love for singing and music thus started, brought him eventually to The Voice. But even after his The Voice success, he continues singing in the church.

After the auditions, he went to John Legend’s team. After that, in the battle rounds, he sang U Got It Bad by Usher and won the round. He also won the knockout round with The Temptations’ My Girl.

In the live playoffs, Victor sang Steve Wonder’s song I wish. And later in the semi-finals, he sang I Can Only Imagine by MercyMe. In both rounds, he was saved by the public’s vote. He was then in the finale where he sang Beyonce’s Freedom. Victor, however, secured the least voice, earning him the 5th place finish.

Victor Solomon was 22 years old as of May 2021. According to a tweet from someone close to Victor, he celebrated his birthday every year on the 24th of September. Thus, we can say that he was born on 24 September 1998. Also, his zodiac sign was Libra.

There was almost no information about Victor’s father. He was pretty much absent from Victor’s social media too. In fact, his mother was a single parent and raised all four Solomon siblings through and past the hard times.

Apart from his parents, Victor has a few siblings as well in the family. For instance, his younger sister Victoria Solomon, who was 19 years of age as of 2021. She graduated from college recently, in June 2020.

There were a couple of other sisters and a brother, who do not know much about except for their names. The info on his Facebook mention two more sisters, Angel Hendriks and Birdy Lovin-meh Morris; and a brother named Barak Smithbama.

Victor’s hometown was Peoria, Ilinois. However, he currently lived in Greensboro, North Carolina.

Victor Solomon is a man of average stature, standing at a height of not more than 5 ft 10 inches. He has short curly hair and dark brown eyes. Also, he wears his beard long without a mustache.

As of May 2021, Victor Solomon had a decent following on social media. On Instagram, he had 24.4k followers. On Twitter, he had slightly less, only 5.8k followers.

He was also present on Facebook but he did not have his own page.

For his education, he went to North Carolina Agricultural and Technical State University, popularly known as A&T.

While he was in college, not only Victor was good at his studies, he was also frequently involved in extra-curricular activities. He was the 14th Mister North Carolina Agricultural & Technical State University. After he graduated in 2021, Josh Suiter became the new mister. Victor also served on the Student Government Association Executive Board while he was at college.

While in college, Victor worked as a Business Office Assitant for the college’s Business department. He also worked as a management trainer for Texas Roadhouse for almost two years. He started that job when he was still in college and is still on the same job after graduation.

Although we do not know the context, Victor also worked as a waiter for a while.

Victor Solomon’s girlfriend in 2021 was Ciarra Noelle, who is an entrepreneur. She is the owner of The Noelle Hair Collection. Plus, she hails from Atlanta, Georgia. It seems like Victor and his girlfriend were getting really serious. There were some posts on Instagram with captions like “I know she the one fa me” followed by a heart emoji.

Victor and Ciarra have been dating since at least January 2020. It seems as of Victor met his current girlfriend when he was at A & T. We were not sure if Ciarra also went to the same college. 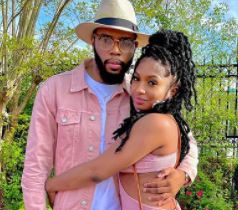