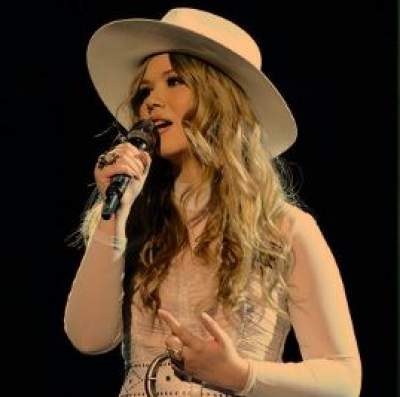 Meet Rachel Mac who is known to the world as The Voice 2021 contestant. On May 18, 2021-episode revealed the Top 5 finalists for the season, and Rachel was one of them. She ended the season finishing 4th.

So, before catching her on the next week’s live season finale here’s this Rachel Mac wiki and everything you need to know about her.

Rachel, from a very young age, dreamed of being on The Voice. At one time, she even gave a school presentation on how much she likes Blake Shelton who has been on the show since its inception.

Anyway, now that she is on the stage for real, Rachel did not let the opportunity go to waste. She consistently wowed the judges with her performances.

For the blind audition, she sang a beautiful version of “Let Him Fly” by Patty Griffin which got her a turned-chair from coach Nick Jonas. So, as Team Nick she continued the journey winning Battles and Knockouts where she performed “Your Song” by Elton John and “Foolish Games” by Jewel.

Then, during Live Playoffs, she performed “Rainbow” by Kacey Musgraves. She got saved winning the most votes while the other Dana Monique (Team Nick) found herself on the Wildcard Instant Save.

And of course, the semifinals saw her powerful performance on “Human” by Christina Perri. Following this, even Nick Jonas could not help but tweet, “@itsrachelmac sings this @christinaperri song with such incredible emotion. ❤️”, for his 14.4 million followers on Twitter to see.

This way, Rachel made it through to the finale. For her final performance, she sang Fleetwood Mac’s “The Chain”.

Rachel Mac was only 15-year-old, performing on the stage of The Voice: Season 21. At the time, however, her birthday and birth year remained unknown.

Rachel Mac grew up with a single dad, Scott McLeod, in her hometown of Romeo, Michigan. She is very close to her father. In fact, it was him who inspired her love of older music.

Rachel’s dad, a worship leader, was on her side at her blind audition and all through the rest of the journey on The Voice. She says it’s her father and siblings who gave her the confidence needed for singing and performing in talent shows.

Her parents got divorced when she was four. And in fifth grade, her dad remarried. He and her stepmom were together for about two years until one day when she too left for good. Rachel explained,

“One day we came home and the house was completely empty. She took everything and left. I love my dad and it wasn’t easy to see him get hurt like that.”

Early in May 2021, the family had a hard time as Rachel’s grandpa breathed his last air.

Rachel’s dad raised her and her two sisters after their mom left them. Rachel shared, her relationship with her mom is great, but it was her dad who raised the three girls.

Her sisters are Olivia McLeod and Amanda McLeod. Olivia (age 25 in 2021) works at Starbucks while Amanda is a marketing director at McLeod Chiropractic. Both are elder than Rachel and can sing like their youngest.

Rachel’s mom, Karen McLeod “Mama Mac” boasted in a Facebook post that she is a proud mama and that her all daughters are exceptional.

“Clearly I’m a proud mama. We all know about Rachel Mac and her exceptional gifts, I’ve boasted about that quite a bit (and still will 😁). BUT…my two other daughters, Olivia and Amanda, are quite exceptional themselves!…”

Rachel Mac stood at a height that is above 5’6” at 15. She is still few years behind to attain her constant height.

Rachel Mac, with the real name ‘Rachel McLeod’, considers herself a folk/indie artist and songwriter. Outside of her The Voice accomplishments, she also released her very first single “Human- The Voice Performance” in 2021. It is now available on Spotify.

Also, once she is done with The Voice she has her theater, marching band, and choir to go back to. Current (i.e. May 2021) she is a sophomore in high school and other times, the leader of youth worship at her church.

This way, the up-and-coming star already managed to pull in an estimated under $100K net worth before she found herself on NBC’s singing platform.

Is Rachel Mac Dating Anyone?

Hippie at heart and someone who uses music as a way to express herself, Rachel does not seem to be dating anyone at the moment.

Rachel has been relatively outspoken about her personal life including her battle through depression. Still, however, her dating life has remained offtopic.

Again, she might not have a boyfriend at the time. But, she sure does have friends for life outside and inside her line of profession. Her fans just found out that she friends with fellow ‘Voice’ contestant Zae Romeo.

Zae, who has been gushing over Rachel on Instagram, made the top 17 before he was eliminated as the show shrunk to the top 9.