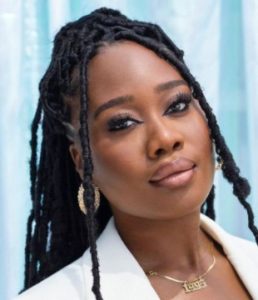 Produced by Issa Rae, known for her work on the YouTube web series Awkward Black Girl, the 10-episode series tries to show what life is like from the cast members’ perspective as they chase their big dreams.

The first season of Sweet Life: Los Angeles introduces us to six young cast members, four women, and two men. Tylynn Burns is one of them.

Get to know about Tylynn Burns’ Sweet Life stint and what she does in real life for a profession in the wiki article below. Also, learn about Tylynn’s family, job, and boyfriend.

The unscripted series, Sweet Life, is basically all the fun, drama, and emotions the young, beautiful, Black men and women experience as they deal with the life-changing moments.

Tylynn was excited to be part of Sweet Life: Los Angeles which was evident in her August 10th Instagram post. She wrote, “This moment is so much bigger than us. We put our heart, souls, friendships, and our stories on the line to produce content that’s genuine and so authentic and BLACK AF! LA and beyond we hope you love it and love us. We’ll see you on Aug 19th!!”

In an interview with EBONY, Tylynn talked about how excited she was to work with the popular personality, Issa Rae. She also talked about why it was important for her and the other ladies in the show to portray themselves as young, Black professional women.

She told, “So we’re giving perspective to a lot of younger viewers. There’s so much more you can do outside of the standard jobs that you think are available to Black people or that Black people have typically held.”

Lastly, Tylynn also shared a few words on what she wants the viewers to take away from the show. She said, “I want people to recognize they’re only as strong as their circle.” She also talked about how dynamic friendships are.

Tylynn Burns was 26 years of age in 2021. That means she was born in the year 1995. On March 18, 2020, Tylynn celebrated her 25th birthday and thanked everyone for the wishes through an Instagram post. Her zodiac sign is Aries.

Born and raised in her hometown in Los Angeles, California, the United States, Tylynn Burns had a decent upbringing.

Though we don’t know anything about Tylynn’s father, her mother’s name is Stacey Jackson. Furthermore, Tylynn’s aunt’s name is Cheree Jackson.

We don’t know much about Tylynn’s family except for the fact that she has recently lost a close relative.

Tylynn Burns stands at an average height of 5 feet 7 inches and weighs no less than 60 kilograms.

However, she was active only on Instagram and TikTok. With about 3.9 thousand followers on the @tytytooofly Instagram handle, Tylynn’s feed is filled with her selfies and a few pictures with friends. Tylynn has 64 followers on her @tytytooofly TikTok account.

As of August 2021, Tylynn Burns does two jobs simultaneously. First off, she has been a Project Manager at Kamp Grizzly since October 2020. Secondly, she is also the founder of House Party Creative LLC, an event series agency.

House Party Creative website describes itself as “a scaling agency looking for client and partner relationships to help transform the experiential landscape and your footprint within Black communities.”

Previously, Tylynn used to work as Co-Founder/Director of Operations at Juneteenth In LA and an Account Coordinator at Crown + Conquer.

Tylynn’s first job was as an Event Leader/Assistant at Emerald Media Group. Furthermore, she has also worked at Allen Hall Advertising, Goodby Silverstein & Partners, 4A’s, and 72andSunny in the past.

For education, Tylynn went to the University of Oregon in 2013. She graduated from there in 2017 with a Bachelor of Arts degree in Advertising and Public Relations. Tylynn did her high schooling at El Segundo High School.

While we don’t know how exactly Tylynn earns as a Project Manager at Kamp Grizzly, a project manager makes $87 thousand in Los Angeles in a year.

Tylynn Burns’ net worth was estimated to be under $350 thousand.

When it comes to her dating life, Tylynn Burns has been very quiet. Unfortunately, as of August 2021, we don’t know anything about her boyfriend.