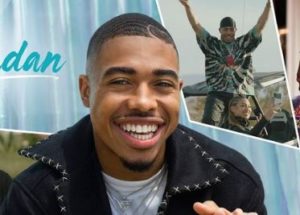 Jordan Bentley was on cloud nine after being featured on HBO Max’s Sweet Life: Los Angeles in August 2021. With unbound happiness, he took it to his IG to write, “Went from buying billboards to being on billboards!!!”

But who is he? Keep reading this Jordan Bentley Wiki to find out.

Featuring young Black men and women as they navigate life in City of Angels, Sweet Life: Los Angeles provided us with unscripted episodes showing what life was like from the cast’s perspective.

According to Jordan, though he was “usually a super private person”, he will be showing all of his fans “a bit” of his “life, relationships, business, and all that good stuff.”

“Yer boy is about to be on TV & Shout out to aunty @issarae for making this happen. You the mf’n GOAT!”, Jordan shared.

As for what he aimed to achieve through the series, Jordan confessed that he wanted to portray black men in a “positive light”. “We have to be a visual representation to show our people that you can make it and you can achieve your dreams regardless of where you are,” he said.

Also, Jordan wanted the viewers to learn from their experiences about growing and persevering.

The show produced by Izza Rae consisted of 10 episodes and was all set to premiere on the 19th of August.

Jordan Bentley was born on November 13, 1996, in Los Angeles, CA. That made him 24 years of age when joined the inaugural season of Sweet Life: Los Angeles in 2021.

Corresponding to his birthday, Jordan is of the Scorpio zodiac.

Jordan Bentley comes from a family of four. He has a sibling named Trevor Williams who is a basketball athlete, and his parents are Stephanie Carter and (dad remained anonymous).

Talking about Jordan’s mother, Stephanie is a former USC and CSUDH Social Science Professor, who helped Jordan initially with his company. In fact, it was from her dining room, Jordan started doing business. He designed t-shirts at the time, while Stephanie drove around in her Prius making drop-offs.

After earning enough, Jordan bought his mother another Prius, and labeled her as “the goat (Greatest Of All Time)”. However, Stephanie didn’t want to take credit for her son’s accomplishments because she knows that she will never take credit for his failures. “Success is a choice, I’ll help you get there but it’s up to you,” she remarked to him.

Jordan Bentley stands tall at a height of 5’10”.

Mentioning his distinct features, Jordan has long face, fuller lips, brown eyes, and short hair with half arc of love sign drawn over.

As of August 2021, Jordan entertained 30.8K followers over Instagram @jordanbentley.

An anime fan, Jordan changed his nascent “hobby” from just becoming a pastime activity to earning thousands from it. He founded Hypland on a passion for blending inter-cultural elements; especially anime and fashion. From Naruto to Demon Slayer, Hypland offered a variety of coveted designs all out for you to wear.

Thanks to his official partnership with Netflix, Jordan was even able to reach out to worldwide customers. Also, Jordan’s brand has been featured at Agenda and Complexcon tradeshows, Hypebeast, and High Snobiety.

His merch cost anywhere from $10 to $200. It featured hoodies, bags, rugs, and lanyards.

Do check Hypland’s IG page @hypland, and Twitter @hypland. It already garnered over 427K and 98K followers respectively (as of 2021).

In light of his education, Jordan attended the University of California, Irvine, and earned his degree in International Studies and Business Management in 2018. After graduation, Jordan shared that running a business and finishing college was the hardest thing he ever did. But, he persevered because he believed that “education is the foundation to success.”

Over Sweet Life: Los Angeles trailer, Jordan Bentley was spotted flirting with his co-star Briana “Bri” Jones. However, it wasn’t clear if the two ever went on to date or not.

As of August 2021, Jordan’s love life remained a mystery to us. But if there is any update on his relationship life, we’ll be sure to update here.

Jordan’s possible love interest, Briana is a healthcare professional who graduated from Western Michigan University in 2017. She has a bachelor’s degree in industrial and organizational psychology. As of 2021, she was working at a non-profit healthcare provider Kaiser Permanente as an Outside Utilization Analyst.