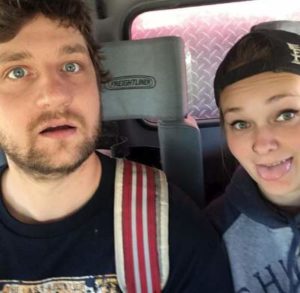 Word has it, Monica Beets, your favorite professional miner from Gold Rush is pregnant!

Monica stars on the reality television series Gold Rush alongside her father/legendary miner Tony Beets, and rarely with her husband, Taylor Mayes.

The two miners had met while working together and eventually tied the knot in 2018.

So, is it true the two are expecting their first baby?

Find out in this Taylor Mayes Wiki.

Just like Monica Beets, who was born in Canada, Taylor Mayes’s nationality is also Canadian. But also Monica’s is precisely Canadian-Dutch.

His mother is named Renee Malfair Mayes. You may find her share glimpses from day-to-day affairs on Facebook.

Taylor Mayes, with blue-hazel eyes and ginger-brown hair, stands above 6 feet in height.

Until 21 August 2021, Taylor Mayes did not seem active on Instagram or Facebook. Also, he has not featured on any of Taylor’s social media.

While Taylor Mayes had not yet shared his net worth, sources claimed his father-in-law is the richest miner on the Discovery series.

And unlike Monica who started full-time on her father’s mining operation at only 16, Taylor has had his own career. Monica herself opened up that her husband her help her with the family business.

Monica was 18 when she was promoted to the role of supervisor, by 20 she was telling men twice her age what to do on reality television, and at 21, she debuted in the fifth season of the Gold Rush.

But then, it is also believed the two met while working together.

So far, Taylor only appeared only in one episode of Gold Rush from 2019’s season, i.e., “Wedding Bells & Emergency Operations”.

Monica, meanwhile, has been a recurring cast member in the show as of 2013.

On 15 August 2021, Taylor Mayes’s wife Monica Beets took to her Facebook to share a photo of them with a newborn who seemed like the baby the Gold Rush fans have been talking about. 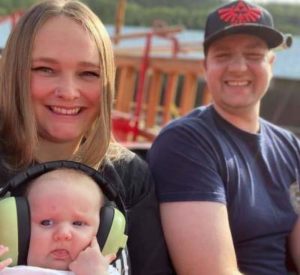 Rumors about Taylor’s pregnancy had started first around April 2021 after a fan commented “Congratulations on the pregnancy, now you’ll definitely see how soft Tony is” on a picture of Monica.

That been said, neither Taylor nor Monica has confirmed the pregnancy rumors.

In the meantime, we know, they have been the proud parents of an adorable pooch, Doyle Wolfgang von Frankenstein, for more than five years from now. Also that, this is not the first instance of pregnancy rumors.

In early 2020, a fan posted a Reddit thread about Monica being pregnant after she was seen getting sick to her stomach on one of Gold Rush episodes.

At age twelve, her father set her in front of a front-end loader and told her to “figure it out.” By sixteen she was working full time in her father’s mining operation.

Taylor and Monica tied the knot in Dawson City, Yukon, on 11 August 2018 in a ceremony documented in an episode of Gold Rush. Monica’s family members including her parents Minnie and Tony Beets and siblings Kelvin, Mike, and Bianca, other rest of the Gold Rush cast members, and her pet dog Doyle all had witnessed the exchange.

The outdoor wedding was beautifully set against a colorful floral setting.

Judging from many of Monica’s past tweets, fans have guessed that she might have started dating Taylor in 2014. A couple of years and she was finally addressing their relationship hinting that her boyfriend and her father got along very well.

Before Taylor, Monica was linked with Brandon Harper. Reportedly, they dated for a long time but broke up at last, and the reason behind it is still unknown. But Monica had a contrasting story to tell. That, she never dated Brandon.

In the statement, Brandon had addressed that he has a crush on his reality show member Monica. But soon after the statement became viral, Monica took to her Twitter to react as — ”Woah Woah Woah. No, I am not now, nor have I ever, dated Parker. He is a nice guy, but getting sick of that.”