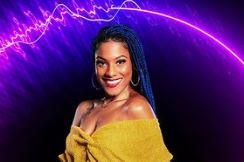 The Circle USA season 1 introduced many interesting faces who joined the show to win $100K. One of the popular contestants from the start was Terilisha. Introducing herself as a cool substitute teacher, she arrived on the Netflix show. On her profile, she also described herself as a Vegan and Leo.

In this Terilisha Wiki, read about the reality star’s boyfriend, job, and height. Furthermore, discover her feud with co-star, Savannah and the mathematical theory she developed in high school.

As it appears, she didn’t lie about her zodiac sign. Terilisha celebrates her birthday on 16th August; making her a Leo.

What’s more, in 2020, she reached the age of 34. On her 34th birthday, she thanked God for blessing her with another day. An excerpt from her IG post from the day read— “Thank you, Jesus, for keeping me (and my family safe) during this pandemic! So many people are sick and dying and you have blessed me to keep living. I haven’t gone without anything.”

Terilisha prefers to keep her last name a secret. Moreover, she hails from Dallas, Texas.

She was born to her parents: Barnard and Terry Godwin-Pierce. A graduate of Bishop College, Barnard was still with Terry as of 2021.

Terilisha has a twin sister named Terimikia Godwin-Pierce. As noted in her Facebook profile, Terimikia is a Cooperative Group Manager. Further research revealed she worked as an Administrative Specialist at UnitedHealth Group.

The Godwin-Pierce twins have a sister named Teira Le’ra Godwin-Pierce. Teira is a resident of Huntsville, Texas, and attended Dallas College Eastfield Campus. 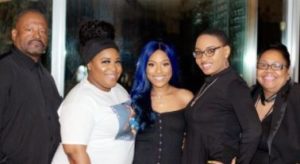 Beyond music, Terilisha excelled in mathematics in school.  A self-described “Smart Cookie,” she admittedly invented a mathematical theorem. She later named it Terilisha Theorem.

On “The Circle,” she boasted about her academic qualifications claiming she had a double degree in math and science.

Terilisha stands 5’3” in height. By her admission, those who meet her in person for the first time say that she’d be taller.

The Netflix star has multiple tattoos including one on her wrist. The tattoo in question even made a lady cry who lost her grandchild.

In her real life, Terilisha is a recording artist and actress.

Thanks to exposure to the music of Aaliyah, Beyoncé, Toni Braxton, Gladys Knight, and more at a young age, she developed a passion for music at a young age. She also sang at the church choir.

At 17, she began her solo career. Before that, the Dallas, Texas-native sang in different girl groups. By 2019, she had released an EP titled “The Blue Heart” that featured songs such as “Jealous,” “Start Over,” and “Georgia Outrolude”. 4 years earlier, her debut album “N.a.S.” had arrived.

Opening about her musical journey, she once shared— “My goal is to create music that I love and that will resonate and touch the mind, body & spirit of everyone who listens and watches me perform.”

As an actress, Terilisha portrayed the role of Khloe in the TV show “Washed”.

If you’re interested in supporting her, buy her merch here.

Although she kept her finances at bay, entertainment sites noted her net worth could be anywhere from $250K to $300K.

By her admission, Terilisha didn’t join “The Circle” to make friends. True to her words, she picked up a feud with her castmate, Savannah early on in the season.

Savannah told Courtney, the early favorite, to not trust Terilisha and Emily. According to Savannah, Emily lied to her about picking Terilisha over her. However, she asked Courtney to remain friendly with the two.

None. Until 15th April 2021, Terilisha hadn’t publically her boyfriend on Instagram.

However, the singer-turned-reality star dropped some hints about her former dating life on Twitter.

According to this tweet dated back to 2010, she didn’t have a boyfriend in high school. A year earlier, she had tweeted that her boyfriend was worse.

Back in 2017, Terilisha attended Trey Songz’s Tremaine The Tour’s stop in Dallas, Texas. The “Can’t Be Friends” hitmaker took her to the stage and serenaded her. Until April 2021, the video of Trey serenading her had garnered more than 500 thousand views on YouTube.