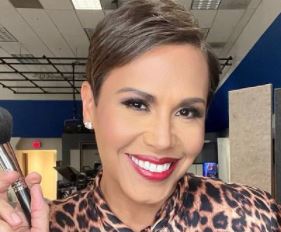 Jovita Moore is a news anchor at WSB-TV. She is an experienced broadcast journalist with a demonstrated history of working in the local TV news industry. What’s more, Jovita is a strong media and communications professional.

Tag along with this Jovita Moore Wikipedia and discover facts about the popular news anchor including her husband, age, and net worth. Furthermore, read about her surgery, daughter, and parents.

In April 2021, Jovita Moore revealed she was undergoing surgery after doctors discovered two tumors on her brain.

According to Jovita, before the diagnosis, she was feeling disoriented and forgetful. In her own words— “I was really concerned about why all of a sudden I was forgetful, disoriented and just not feeling myself. Feeling like I was in a fog and really wanting to get out of that fog.”

Jovita also shared that she almost passed out during one of her runs to a grocery store. The scan later showed she had 2 masses on her brain.

Ahead of her surgery, Jovita asked fans and well-wishers for prayers. According to PEOPLE Magazine, her recovery could last anywhere from 8 to 10 weeks.

On 29th July 2021, Channel 2 Action News broke the tragic news that Jovita has glioblastoma — an incurable form of brain cancer. Although the doctor told her there isn’t a cure, she was still undergoing radiation and chemotherapy.

In 2020, Jovita Moore reached the age of 53. Moreover, the beloved news anchor celebrates her birthday on 4th October. So does her co-worker at WSB-TV, Wendy Corona.

On 4th October 2020, WSB-TV’s Twitter page shared a photo of Jovita and Wendy and wrote— “Two of our favorites! Help us wish @JovitaMoore and @WendyCoronaWSB very happy birthdays! Keep smiling!”

What’s more, Jovita is a Libra.

According to Jovita Moore, she stands 5’8” tall. Despite the height advantage, she didn’t play basketball in high school and college.

Sporting short hair, Jovita appears more beautiful than the women half of her age. Moreover, she has beautiful black eyes.

As of 2021, Jovita Moore lived in Brookhaven, Georgia. Previously, she was a resident of Atlanta Georgia.

Talking about her parents, Jovita once Instagrammed a throwback photo of her mother. In an accompanying caption, she wrote— “Words can’t describe how important Moms are. Be thankful for yours today. Happy Mother’s Day!”

Jovita’s known family members include Gloria Moore, John Moore, Lois Moore, and Terri Moore. Any of the above names could be his sibling.

After high school, Jovita attended Bennington College and graduated with a B.A. in Literature in 1989. She then received her M.S. in Broadcast Journalism from Columbia University – Graduate School of Journalism.

If one were to believe online reports, Jovita Moore owns around $1 million net worth.

A news anchor working in Atlanta pockets around $55K in salary. Given her seniority, Jovita ought to take home more than what an average news anchor does in a year.

Between October 1993 and April 1998, Jovita served as the News Anchor/Reporter at the Memphis, TN-based network “WMC-TV”.

Jovita began her career at “KFSM Channel 5,” joining the network in October 1990. 3 years later, she quit the gig.

Jovita Moore Husband, Was She Ever Married?

Jovita Moore was once reportedly married to a man named Sean Griffith. She and her now-former husband, Sean are no longer together.

While still married, Jovita often let her Twitter followers know about her husband. In a May 2011 tweet, she wrote— “My husband walked into the kitchen and asked, “What the h are you doing?”

What’s more, Jovita is a mother of two kids— a son and a daughter. However, some media outlets claimed she has 3 children. Jovita’s daughter, Shelby turned 18 years old in 2020. In May that year, Shelby graduated from high school. Those who knew the duo commented that Shelby has Jovita’s smile. Reach out to Shelby on Instagram @theshelbster101.

As for Jovita’s son: Joshua was born in July 2005. On Joshua’s 9th birthday, the news anchor wrote— “My best buddy is 9 today! Happy Birthday, Joshua! Mommy loves you soooo much!”