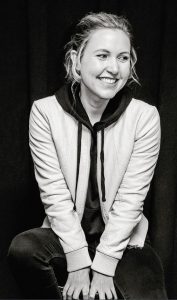 A natural at the art of comedy, Taylor Tomlinson got instant love from the fans for her rib-tickling humor on teenage life.

Especially, the 20-something-year-olds immediately related to her as soon as some of her performances got popular on the internet.

In addition to that, the comedienne was nabbed by Netflix to join its star-studded lineup in comedy in the show, “Quater-Life Crisis”, which premiered on 3 March 2020.

For more insights on this emerging comedian including her boyfriend & net worth, this wiki-type article is the perfect starter pack for you.

Taylor Tomlinson, whose full name is Taylor Elyse Tomlinson, was born on 4 November 1993 in Temecula, California.

She was the eldest daughter amongst her three siblings (all sisters); Drea, Page & Brinn Tomlinson from parents Eric and Angela Tomlinson.

When Anglea and Eric conceived Taylor, they were still in college. After getting married, Angela dropped out and focused on raising the family.

Growing up, things were not very sorted out for Taylor and her family. Her mother passed away in the year 2002 and the girls had to call Serina Ortiz, who their father married in 2003, their mother.

Together with his wife Serina and mom Jan Tomlinson, Eric began a real estate empire in Temecula.

Drea and Page attended Fullerton College and Palomar College respectively. As of March 2020, Brinn was a student at California State University, Fullerton.

Meanwhile, Taylor completed her high school at the age of 16. And just when she was making a transition into college, the beloved comic found her real passion in life.

Later, Taylor decided she would pursue a career in comedy and dropped out of her college to live her dream.

Taylor Tomlinson’s journey to choose comedy as a career was not something that one does to fuel a passion inside themselves.

It was a mere incident that took place at the start of her college. Her father, Eric Tomlinson planned a bonding session with her which was at a stand-up comedy class.

Since the family was very religious, the classes were run by Christian comedians on churches. One day, the comedy coach saw Taylor perform and immediately approached her to join them.

There, Taylor toured around different churches and performed all over the place. At the age of twenty, she was already doing non-church shows and performing in college & late-night shows.

After a steady start to her comic career, the comedienne was selected in “Late Comic Standing,” and finished in the top 10.

The said honor massively escalated Taylor standards as a comedian and helped her build a stable net worth of more than $800k for her. 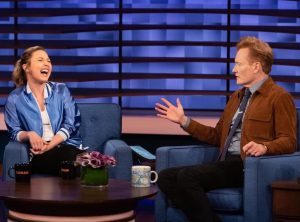 Taylor Tomlinson at the Conan show in 2019 (Pic: Taylor’s Instagram)

To those unfamiliar: Kyle is the founder of “Don’t Tell Comedy” and has been linked with Taylor on several occasions.

Though both did not confirm their relationship openly, Taylor and alleged boyfriend Kyle were assumed to have even gotten engaged to each other and were even getting ready to be married.

However, the wedding rumors seemingly went out of the picture as the two might have parted ways with each other. Via a September 2019 tweet, the “Quater-Life Crisis” star confirmed being single — having split from an unidentified boyfriend.

On 3rd March 2020, Sam took to IG and shared a bunch of pictures that featured Taylor falling asleep on his arms. 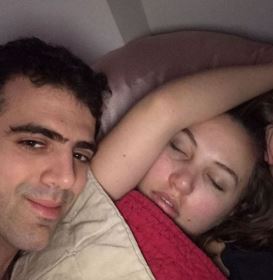 Before Sam was crowned her boyfriend, Taylor formed a formidable friendship with him. In a PEOPLE Magazine interview, the “Quater-Life Crisis” revealed that the duo’s relationship was very organic.

Because Sam was a comic too, Taylor felt they understood each other better.

Admittedly, Taylor’s previous romantic endavours with non-showbiz boyfriends fell through because they didn’t get her line of work.