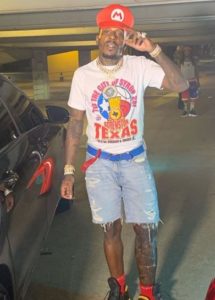 Does the phrase “Wack to Wack” ring any bells? The first thing that might occur is that it sounds similar to Drake’s infamous “Back to Back.”

The former was a diss written by Houston rapper Sauce Walka taking shots at Drake, which spawned waves across mainstream hip hop.

Where Is The Rapper Sauce Walka From? Age

Born on the 29th of June 1990 to an addict mother and a wrestler father, Walka Sauce had a troubled upbringing along with his brother Dillon Clemons which forced him to street life.

Later in his life, Houston, Texas-native met Sancho Saucy, the other half of “Sauce Twinz.” The connection proved to be a turning event in his life.

The duo so formed released a mixtape “In Sauce we trust,” which garnered them full recognition.

Walka – age 26 (as of August 2019) – lyrics forged the controversial subject matter, the story of a troubled childhood, life on the street, drugs, and violence gave him his sound.

The “Ring Around Rosies” hitmaker has faced a fair share of “beef” over the years dissing rappers like Young Thug, Drake, Future, and others.

In 2019, Walka – whose real name is Albert Walker Mondane – made homophobic comments against Young Thug. Via an Instagram clip, he said:

The beef initiated with Walka going on Instagram captioning a criticism towards rapper using the word “slime.” Thug responded with a threat to slap the one-half of “Sauce Twinz.”

Previously, Walka made it more exciting taking a shot at Drake. The diss track “Wack to Wack” gathered over a million views on YouTube within months of its release.

On it, Walka rapped:

“At Treasures spending your money on these bitches, little perv/And I ain’t talking bout dancers, you was paying for pussy/I was pimping so I knew about that shit, little rookie… “

Besides his rap nemesis, the “Ghetto-Gospel” rapper hadn’t been able to keep himself away from angry husband and jealous boyfriends himself.

Walka Sauce once posted a video online making a woman call her boyfriend after they smashed. He yelled out loud:

Similarly, women (potential girlfriends) online made headlines for sharing stories about being with him and getting an inappropriate proposal from him.

In 2019, the “2 Legit 2 Quitted” rapper demonstrated his softer side posting several videos of him holding and playing with his adorable daughter inside a store. Much less remains unknown about his baby-mother.

What Is Sauce Walka Net Worth?

Back in 2017, Walka Sauce posted a video with his alleged girlfriend with then-newly bought Ferrari.

Two years later, he announced a recording deal worth over 4.5 million dollars via Instagram. His burgeoning net worth was on bright display when he forked out 1.5 thousand dollars at the Marathon Clothing Line in 2019.

“Sauce Ghetto Gospel” and “Holy Sauce” are his notable albums. Meanwhile, Walka gets best recognized for songs such as “The Kid That Did,” “Ring Around the Rosies” and “Sauce Overload.”