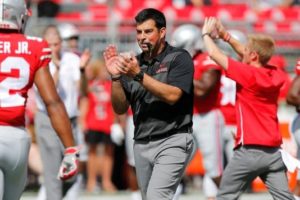 Ryan Day is a perfect role model for a coach that any sports team wishes it had.

Commendable for his coaching attributes to philanthropic nature, he took the responsibility as the 25th head coach of Ohio State University in 2019. In doing so, he replaced Urban Meyers.

Where Does Ryan Day Come From? Bio & Age

As a young boy, Day attended Manchester Central High School in New Hampshire where he grew his love for football. He lost his biological father to suicide when he was just nine years old.

Day played quarterback from 1997 to 2001 at the University of New Hampshire where he majored in Business.

Ryan Day tied the knot with Christina Spirou nicknamed “Nina” in June of 2005. 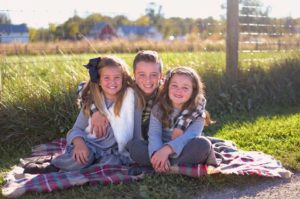 Their unity blessed them with two beautiful daughters (Grace and Ourania Day) and a son(Ryan Day Jr.).

Losing his father to suicide, Day had an urge to try to contribute something from his side. It is why he and his wife started a fundraiser for Mental Health Awareness.

The married duo decided to start the fundraiser with a $100,000 donation on their own to invite other prospective donors. Day once revealed:

“We are excited to join the national On Our Sleeves movement in support of children and young adults living with mental illness.”

Ryan Day initiated his career as a coach in 2002 at New Hampshire as a tight ends coach. He contributed as a Graduate Assistant and Wide Receiver over the years.

In 2012, Day’s coaching career took off as the Offensive Coordinator for Temple. Later on, he held the same role for Boston College from 2013 to 2014.

In January 2o19, Day got entrusted with a coaching job for Philadelphia Eagles’ quarterbacks. With Day’s former coach Chip Kelly relieved from his position of head coach on Philadelphia, Day got appointed for the same job.

Day caught the attention of Ohio State Buckeyes with his quarter-back standpoint and offensive mindset, which allowed him to take on co-offensive coordinator Tim Beck on the 3rd of January, 2017.

In August of 2018, Day got named as the acting head coach at Ohio state, the position held by then-coach Urban Meyers. Four months later, Day would take on the full-time coaching job after the retirement of Urban Meyers.

Upon the announcement, Day shared:

”The culture Coach(Urban Meyer) has set here with all these guys, it’s amazing. The locker room and the character, not just with the players, but their families, you know, sticking together, the whole thing. So because of that, we’ve been able to come through the back end of this thing.”

Day’s annual salary is believed to be over 4.5 million dollars while his alleged net worth to be over $3 million.