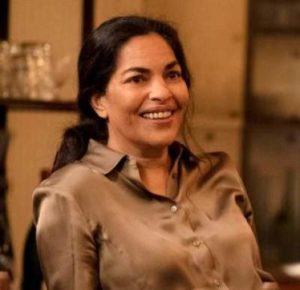 Ready for the next chapter of S*x and the City?

HBO Max’s S*x and the City renewal series And Just Like That… is soon coming to you with its original s*xy rom-com, modern pop culture theme, and 10 episodes.

So, what’s new this time?

In the meantime, read all about one of the newcomers, Sarita Choudhury, in this writing. In doing so, find out if she is a married woman; if she is still with her baby father; as well as if she is black.

Sarita Choudhury and two others will portray three powerful New York women. While their connection to Carrie and the gang was yet to be revealed, we learned, Sarita alone plays a single, self-made powerhouse Manhattan real estate broker, Seema Patel.

As per her ethnicity, no Sarita Choudhury is not Black. Instead, she is an equal blend of half-Indian and half-English. She grew up Indian dominated by her Indian father’s culture.

Her parents are Prabhas Chandra Choudhury and Julia Patricia Spring, who married in 1964 in Lucea, Jamaica.

Her father is a scientist and had a global perspective which made him go from Culcutta in India to major cities around the world.

Middle of the three siblings, Sarita has a younger brother, Kumar Michael Choudhury, and one older brother, Chandra Paul Choudhury.

Sarita’s birthname is Sarita Catherine Louise Choudhury. She was born in London, England but brought up in Jamaica, Mexico, and Italy.

Before the world knew of Sarita Choudhury’s new journey with HBO Max, she had above an estimated $2.5 million net worth.

Ever since a 16-year-old, she was dreaming of becoming a dancer or an actress. (She had started taking lessons when at the age of four.)

The Homeland star studied Economics at Queens University in Ontario before switching to Acting. She began acting in films made by her classmates and friends. Then one day, she found herself at Federico Fellini’s door. And not only did he see her, but he also gave her a job of translating scripts. This soon brought in many opportunities to make connections in the film industry, which in turn led to her auditioning for movie roles.

And thus in 1991, she landed her first big role in Mississippi Masala from the acclaimed Indian director Mira Nair. The film also starred Denzel Washington.

Yes, Sarita Choudhury is a married woman. And she has had a husband for a very long time.

Back in Sep. 2010, while in an interview with DNA India, Sarita Choudhury had spoken her husband is not at all from the industry. Instead, he is a war photographer. Also, after a lot more pressing on the topic, she had spilled, it is from him where her baby (her then seven-year-old daughter Maria) gets her blonde hair from.

Beyond that, Sarita was actually reluctant to talk about her husband or their married life. In fact, she had insisted “I don’t want to discuss about my husband here. Hope you do not mind that” when the interviewer quizzed her on the subject for the first time.

Rather Sarita was more excited to discuss her dream on-screen husband in Bollywood. She answered she would love to work with the legend Naseeruddin Shah over anybody else.

“I think that I would look compatible with him. He (Naseeruddin Shah) is my Robert De Niro. I want to come back to India again and do a film with him”

Fast forward to today, there were no real updates on The Hunger Games: Mockingjay actress’s married life.

Because she was absent on social media platforms also helped her need to keep her personal affairs to herself.

Sarita Choudhury previously dated actor Sam Rockwell. Their dating timeline remained unclear. Later, after they broke up, Sam had claimed she was the one who got away.

Who Is Sarita Choudhury Baby Father?

So, we know, Sarita Choudhury is the mother to her only child Maria (born 2003) whom she shares with her husband and baby father. While she was yet to talk more about him, she discussed her daughter Maria on public and media platforms now and then.

Back in 2010, when Sarita played Simran Verma on The Good Wife and was enjoying her newfound fame, she had shared about wanting to move to India with her daughter. Sarita, who insists her heart stays in India said:

“I want to [move to India]. People think I don’t want to come back. They think I want to be in America as it has been really good to me. But I need something more culturally rich now”

Sarita, who then traveled everywhere with her young one, even had signed an agreement with Maria’s school that she will accompany her on her every trip. As she believed traveling also helps one to get educated.

If in case of a short trip, the matriarch preferred to home-school Maria. And like that, as Maria grew up, Sarita made sure her life revolved around her daughter.

Back in the day, the Kama Sutra: A Tale of Love actress had also briefly mentioned her young kid’s inclination towards acting and Bollywood.

“She [Maria] is such an actress! I think she is more of the Bollywood type. All her teachers tell me that she loves to perform.”