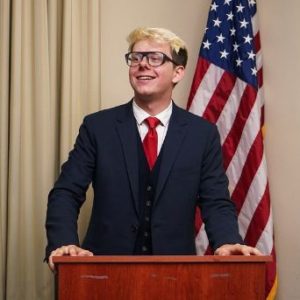 Erik Finman earned wide recognition as the youngest bitcoin millionaire. He is a tech entrepreneur and founded several companies. In July 2021, he introduced Freedom Phone to the world and again stirred conversation online.

Scroll down to learn more about him and with this Erik Finman Wikipedia.

On 14 July 2021, Erik Finman tweeted: “Today I’m announcing the Freedom Phone. This is the first major pushback on the Big Tech companies that attacked us – for just thinking different. Complete with its own Uncensorable App Store & Privacy Features. We’re finally taking back control. ”

According to the website of Freedom Phone, it is a free speech and privacy-first focused phone. With features like tracking blockers and an uncensorable app store. The phone works on Verizon, AT&T, T-Mobile, & Sprint. The product was priced at $499.99.

Erik Finman celebrates his birthday on 26 October. He was 22 years old as of 15 July 2021. He secured Scorpio as his zodiac sign.

Erik Finman was born to his parents: (father) Paul Finman and (mother) Lorna Finman. Paul and Lorna met at Stanford University in the 1980s. At the time, Paul studied electrical engineering and was getting his Ph.D. whereas Lorna was getting her Ph.D. in physics. Their first date consisted of sitting in her room eating a can of beans.

In an interview, Erik told: “Our dad is, like, the least romantic person ever. She had a spectroanalyzer that he wanted.”

Later on, Erik’s parents married and the family moved to Post Falls, Idaho, near where Paul had grown up. His parents’ company LCF thrived since 9/11 after winning lucrative contracts from the Department of Defense to make specialized amplifiers with the ability, among other things, to jam the improvised explosive devices American troops encountered in Iraq.

Erik’s parents homeschooled his two older brothers Ross and Scott. They gave each of them an office at LCF to pursue his interests. The Finman siblings would spend time with engineers instead of getting a recess.

His older brother Scott who enjoyed coding entered Johns Hopkins University when he was only 16 years old. Whereas, his other brother Ross was interested in robotics did his senior year in high school at Harvard when he was 16 and pursued Ph.D. in A.I. at MIT.

The Finman siblings are extremely competitive with each other but close. Erik cited Scott as the one who inspired him to go purchase the bitcoin. Whereas, he and Ross shared more of a father-son relationship dynamic than as brothers when they were together when their parents left them for three months because of their work.

As Erik Finman told Forbes, his interest in politics was the first thing that got him interested in bitcoin initially. He told Forbes: “[I] saw this as an incredible way to transcend the financial system including Wall Street”

On 27 June 2020, Erik tweeted: “Politics have become reality TV for too many people, and it shows. The direction of our country was meant to be driven by our brains and our hearts, not by our wallets and our outrage.”

Erik Finman looked small in pictures but stands at a height of nearly 6 feet (1.82 meters). He was lean and previously went on a Paleo diet. He owned a steel Pebble smartwatch.

Erik Finman should garner a net worth in the excess of $50 million.

Besides being homeschooled or early years, Erik’s parents put him in a series of private and public schools, but none of them took him in. One teacher even advised him to drop out and start working at McDonald’s.

However, the genius gene ran in the family and he was no exception. He was bright, curious, and creative from the very beginning.

When Erik was young he crept into his mother’s bedroom, swabbed her mouth with a Q-tip without waking her. He then used the sample to commission a painting of her DNA with which to surprise her at Christmas.

The young genius had an agreement with his father that they would let him drop out of college if he made $1 million before he turned 18.

Talking about his jobs, Erik Finman worked as sales and Marketing intern for Sprayable Energy, landed Global Communities Manager internship at SmartUp in 2015, founded Botangle and ran it from 2013-2017, became marketing director of STEM Revolution Education from February 2016-July 2019, then served as the project marketing lead in CoinBits, and served as a manager for Metal Pay starting from 2019.

Erik Finman is very private when it comes to his dating life. From intelligence to financial security, to being contained and creative, he has all the attributes to have in a girlfriend. However, it seems he is all focused on creating something big rather than getting indulged in a relationship.

So, we believe that Erik Finman is either single or hiding his dating life with his girlfriend away from public attention.