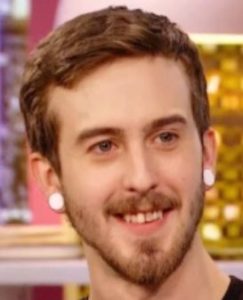 Sean Austin and Jade Cline’s saga first began when they were only kids. Jade was in the 8th grade and was staying with her grandmother and Sean was a freshman in high school, i.e. in 9th grade.  Jade was 19 when she was pregnant with their daughter.

In this article, we cover Jade Cline and Sean Austin’s story. We have already covered Jade’s side of the story here. Here, we will cover everything about Jade Cline’s baby father over this Sean Austin Wiki.

Keep reading and you will find out interesting facts about Sean like his age, job, height, etc. You will also come to know how good/bad baby father Sean Austin is.

As we have already mentioned, Sean Austin is the baby father of Jade Cline. Jade Cline is a famous reality television star who had appeared on Teen Mom: Young & Pregnant and also in Teen Mom 2. Apart from being a reality show star, she is also a make-up artist. She had even enrolled in a beauty school as a cosmetology student and started her own salon.

We do not know when Jade Cline and her baby father Sean Austin started dating. Yes, they met when they were still kids but they might not have begun dating right away. Or they might have. In any case, the first of their kids, a daughter, who they named Kloie Kenna Austin, was born in September 2017.

The Cline-Austin family celebrated little Kloie’s third birthday on 19 September 2020. And her fourth birthday was coming soon. However, it seemed like Sean did not like being a father too much. When Jade was really busy with her salon, Sean agreed to take care of Kloie. However, he did not like being a stay-at-home-dad. He even called their young daughter a “demon”.

As with most reality TV stars, there were a lot of rumors about Sean and Jade’s relationship. There were many engagement rumors, some elopement rumors, both of which were denied by Jade. There were also speculations about if they wanted more children. Well, according to Jade, no, they do not. Both of them had their hands full with pursuing their respective dreams and taking care of Kloie.

Moreover, Jade, the mother of his child, was only 25 years of age as of July 2021. And although they have three years age gap, when they first met, Sean was only a year above her in school. During one of their fights, Jade had called him a “30-year-old man”, which does not exactly seem to be true.

According to his Facebook profile, Sean’s hometown was Bellflower, California. However, he was currently living in Indianapolis, Indiana in 2021.

Talking about his family, Sean Austin’s mother is Cindy Austin. We know no more about his mother and we know absolutely nothing about his father. Apart from his parents, Sean had two siblings, a brother called Brandon and a sister called Jennifer. Brandon is actually his twin brother.

While we are still on the topic of family, Sean seemed to be close to Jade’s family as well. According to a 2019 Instagram post, he hung out with Jade’s mother.

Sean Austin is a tall guy and stands at a height of exactly 6 ft. His other distinct features include blue eyes and brown hair and his signature cap, which seems to be in almost all of his photos on social media.

Sean Austin is also a huge tattoo guy. He has tattoos all over his two arms, from the biceps to wrists, and even the back of his palms.

Thanks to his appearance on MTV‘s Teen Mom: Young & Pregnant and Teen Mom 2, Sean Austin had a decent social media following as of 2021, especially on his Instagram. He was on Instagram at @seanxmtv, where he had only 39 posts but over 44.6k followers. He was also present on Facebook, but we could not find him on Twitter or Tiktok.

To mention his job title, Sean Austin is a beatmaker and a DJ. In fact, he has his own beat-making business called DJ SevnScis. It seems like DJ SevnScis no longer exists, even though the bio on his Instagram still says that he is a business owner at DJ SevnSics.

Interestingly, Sean also used to be a rapper and went by the name of Lil Foot.

Apart from all his jobs, Sean Austin is also a reality series star. He had appeared on MTV shows like Teenage Mom: Young & Pregnant as well as Teen Mom 2. And as of 2021, Sean had earned a net worth of about $150 thousand.