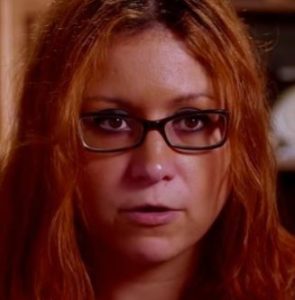 Sabrina Burkholder is the only Mennonite cast member amongst the Amish cast members in a show about Amish culture and Amish people. But that does not maker mean she is any less important in terms of drama she brings to the show.

The show we are talking about is Return to Amish, whose sixth season premiered on TLC on 22 March 2021. In this article, we shall provide you everything you need to know about her, including interesting info like her age and her job. Read along with this Sabrina Burkholder wiki!

Sabrina Burkholder Parents, Is She Amish?

Not much was known about Sabrina’s biological parents for they left her in a trash can. She was found by a Mennonite family who adopted her and raised her. She did eventually learned the identity of her biological parents. They were Italian and Puerto Rican.

However, she never really build a good relationship with her biological parents. She did, however, attended her father’s funeral when he died in 2012.

While we do not know the exact identity of her adopted parents, we know that they were of Mennonite faith, not exactly Amish. Although she was in a reality show about Amish people, Mennonites and Amish are not the same. So, no she is not Amish.

Sabrina Burkholder stands at quite a tall height of 5 ft 7 inches. She had a weight a little on the heavy side, around 65 kgs. Furthermore, she has copper-red hair and blue eyes.

As of 2021, Sabrina was present on social media, but she was not really an active social media user. On Instagram, she had 5.8k followers but there were only 9 posts in total. Similarly, she had 9.8k followers on Twitter, but she has not been active on Twitter since 2014.

She also had a Facebook page called Hope to Recovery with 4k likes and a similar amount of follows. The page was dedicated to sharing uplifting messages about her recovery from Heroin addiction. However, on there too, her last post was in 2018 and since then nothing.

Sabrina is a reality TV star. And that is pretty much her job. She debuted for TV with TLC‘s reality series called Breaking Amish back in 2012. The show was an instant hit, garnering controversy and fandom.

The success of the show led TLC to create a spin-off series called Return to Amish and Sabrina is also a part of that series. While the former series chronicled the lives of people who left the Amish/Mennonite faith, the spin-off was more focused on people wanting to return to their roots.

Sabrina has been very honest about herself in both of the shows because she said that she took her job for TLC very seriously and that audiences need to know the full story of her, warts and all.

Sabrina Burkholder’s boyfriend was Jethro Nolt in 2021 and yes, they were still together as of May that year. Sabrina and Jethro met a long time ago but our reports say that they started dating only in 2017. Apparently, Jethro was the son of a Mennonite preacher and Sabrina knew from her Mennonite days.

If you tune into Return to Amish, you will find a lot of drama between Jethro and Sabrina. Things were going great for a while. They had two kids together. Their eldest son Zekiah was born in 2019 and in 2020 their daughter Skylah was born.

Soon after the baby girl was born, Sabrina found Jethro texting other women, and that caused a quarrel between them. Sabrina started shouting at him and he walked out on her and their two kids.

Later, Jethro tried to make amends. He apologized and also said that had it been her who had walked out on him and their kids, he would have killed them. He told her he could not stand what he did and Sabrina accepted his apology and accepted him. The two of them had agreed to work on their relationship.

There were also some rumors regarding a potential engagement between the two of them. Apparently, Jethro had promised to marry but Sabrina did not really believe him. However, there might be an official engagement coming soon. You must tune in to Return to Amish on TLC.

Dear readers, you already know that Sabrina Burkholder has two kids with her current boyfriend, Jethro. But they are not the only kids of Sabrina. In fact, she has two daughters from her previous relationship with her first baby father, Harry Kreiser III.

The names of the daughters were Oakley and Arianna and Sabrina did not have custody of either because of her very serious heroin addiction. She even almost died once because of heroin consumption.

Sabrina might not have custody of her eldest daughters but she frequently visits them and is in close contact. However, neither of her daughters appears on either Breaking Amish or Return to Amish. Apparently, their adoptive parents want the girls away from the spotlight and Sabrina is just respecting their privacy.