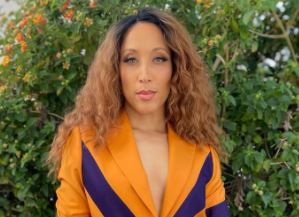 While many creators stopped their production amid the 2020 COVID-19 pandemic, Robin Thede was on a rollercoaster producing the Emmy-nominated sketch series A Black Lady Sketch Show season 2.

So, with season 2 here, let us also take a time out to learn all about Robin’s personal life; especially about her husband/partner over this article.

Robin Thede (born as Robin Ann Thede) was 41 years of age in 2021. She celebrates her birthday on July 27 and is of the Leo zodiac.

The writer/actress Robin Thede was born to parents, Dave and  Phyllis Thede. Her father Dave is a German-American and educator by profession, whereas her mother  Phyllis is of African-American descent and worked in a community school.

Reportedly, Phyllis later went on to become a Lowa State Representative in 2009 and held the position for a long time. Also, during the 2020 election, she worked closely alongside Kamala Harris.

Most of her posts highlighted her content from work, and only a few featured herself.

Overall, Robin is a talented comedy writer, and sketch and improvisational comedian who is credited to several movies and TV shows like — The Queen Latifah Show (2014), Real Husbands of Hollywood (2014),  In the Flow with Affion Crockett (2011), and Clunkers (2011).

In light of her education, Robin attended the Northwestern University to study Broadcast Journalism and African-American Studies.

Robin Thede always dreamed of having a husband, but she also admitted that she never had the best luck in the dating game. With a history of bad dates, Robin’s “search for a partner” continued as of 2021, or to simply put it, she wasn’t married then.

Go check out her interview with Wendy Williams (dated Feb 2018), to hear more about all the bad dates she encountered.

Moreover, the comedy writer also found much humor in her inability to find a partner. In Feb 2016, Robin inquired if any of her followers knew how to order her boyfriend. And a month later, she joked that she has “got like 12 boyfriends”.

Furthermore, if you have been following Robin over socials then you should know that Robin has a history with comedic bulges about her love life.

Just in case you missed it — Back in September 2013, Robin tweeted that the NFL baller, Wes Welker was her white boyfriend. Later, she vowed that her future husband would work the counter at the Waffle House on Labor Day. Also, Robin once shared her “wisdom” that the availability of cookies was the secret to being happily married.

However, it seems that not all of her jokes were made up. She confessed that the rapper, Common actually gave her his number on their first introduction. According to her, she was on the set of All of US rehearsing her lines, and all of a sudden, “a glowing man” walked in. She then immediately rushed to him and said “Can we help you?” Common replied, “I’m looking for Stacy”.

To which, Robin told him that Stacy was in a meeting — “but if you would just hang out with me for a second…” and they talked a while

So, later as Common was done with his work, he came back to Robin and asked if she had a piece of paper.

Overall, Robin shared that she didn’t have love but she “needed it”. As for her type, she wanted “nice guys”, but joked that she wouldn’t date Deon Cole because of their friendship.

Fun fact: Robin’s was once encouraged by her friends to approach men and she did it! But it turned out that the first person she approached was gay.