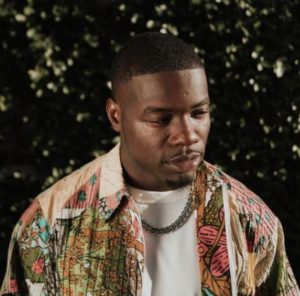 TDE, the West Coast record label known for giving stars such as Kendrick Lamar, Jay Rock, Ab-Soul, Schoolboy Q, among others, signed a new artist Ray Vaughn. They made it official with a press release and Ray announced it on his Instagram.

Delve into this Ray Vaughn Wiki to learn more about his net worth, age, height, TDE deal, and girlfriend.

On 26 August 2021, Ray Vaughn made an official announcement that he was the new artist of Top Dawg Entertainment after he signed a record deal. The label was home for artists such as Kendrick Lamar, Reason, SZA, Schoolboy Q, Ab-Soul, Isaiah Rashad, Jay Rock, and SiR.

According to TDE, Ray has been a part of the TDE family since 2020. However, he took his time to further hone his craft and was patiently waiting for his turn for the debut. The label released his debut EP Peer Pressure.

Ray Vaughn Welch was born to his Jamaican parents in California, United States. His single mother Iesha looked after her seven kids after her partner walked out on the family while Ray was young. Among his brothers and sisters, he allegedly has a twin brother who goes by the TikTok id (@yofavnumber).

Ray always showed appreciation towards her mother for raising him and six of his siblings. He also writes tweets about her on his Twitter.

Surprisingly, Ray is also equally active on TikTok where he posts under the handle name (@ray.vaughnderay). He had 45.9k followers and earned 571.9k likes for his videos as of Aug 2021. Ray has a profile as well as a page on Facebook. His FB personal account garnered had 4.9k friends. Whereas, his page had 46k followers.

Ray Vaughn has taken his first step towards the burgeoning net worth that will reach $1 million in no time.

Looks like at the time when Kendrick Lamar cleared the air that his next album would be the last album from TDE, the West Coast label signed a promising new conscious rapper named Ray Vaughn. As an artist, he looked up to several artists like Lil Wayne and Fabulous and cited rapper Drake as his idol.

Plus, Ray also claimed them to be his top three in The Launch Table interview. Ray inherited the depth from the music of Drake and metaphors from Lil Wayne and Fabulous.

He also grew up listening to all genres of music including gospel.

Ray went viral for the first time when he rapped about relationships. He understood that it was the recipe for success so he started writing deep sentimental kinds of stuff to please his fans. Ray started promoting his music after pushing them through social music streaming platforms like SoundCloud and Spotify.

The Long Beach native had earned a monthly 16,729 listeners which are expected to have extensive growth now that he signed with TDE. Ray had released at least one-two EP titled Blame Summer and Peer Pressure. He also released an album titled Idle in 2019.

Ray also created a self-titled YouTube channel. He had earned 62.7k subscribers. He released videos to songs like Triggered, Blindfold, Attention, Commit, and You Don’t Even Care You Hurt Me.

Before 2021, Ray Vaughn was in at least two different relationships. Having being involved in both relationships, he had two daughters only a few weeks apart from each other. Most people who checked his profile believed that he had twins but that doesn’t seem to be the case, as he confirmed the Facebook.

Regardless, Ray had maintained a sound relationship with both of his baby mothers, until he lost his baby mother Stephanie Giselle in May of 2018. He had welcomed Sienna Rae Welch on 7 March 2018, two months before his baby mother’s death.

When Ray welcomed her to the world, he wrote on Facebook, “My Pops Walked Out On Me SiSi Won’t Feel That Pain.” He was grieving and addressed her death wherever he was interviewed.

Ray had announced the pregnancy in August of 2017. Whereas, he announced having a girl on 27 September 2017. 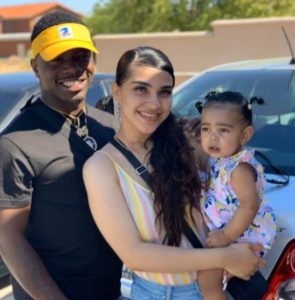 Ray Vaughn and his baby mother who allegedly is also his girlfriend (Pic: Ray’s Facebook)

On a different note, Ray also talked about cheating on his ex-girlfriend after she set him up. His second daughter is A’lani J. A few snaps of A’Lani’s mother surfaced on social media, but no precise details existed on her.