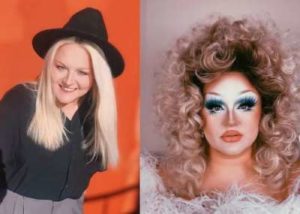 You are here means, you know what Drag Race UK is about. The show documents RuPaul and a panel of judges’ search for “the United Kingdom’s next drag superstar”.

With the third series of the BBC show airing in September 2021, fans have been curious about the 12 new queens joining RuPaul’s Drag Race this season. Among them is Victoria Scone and the rest of the writing is just about her.

After it was revealed Victoria Scone is making her story as the first cisgender woman to compete on any season of Drag Race, many have regrettably taken offense with the casting decision.

Be that as it may, Victoria has defended her place on the show taking these critics head-on in a series of posts shared on her Twitter page.

“I embody every gender stereotype that’s ever been instilled on me (as a woman) by society. I heighten it, I laugh at it, and then take a big queer shit on it.”

Still, many applauded Victoria as one of the drag performers in the season that is “celebrating diversity as they assemble queens from all backgrounds.”

Being the first female contestant on Drag Race UK, Victoria feels proud to represent the community of women in drag.

Victoria said she wants to win the race for marginalized minority groups in the drag scene so that they can see somebody like her make it on the show. Then again, she also stressed she does not want to be referred to as an AFAB (Assigned Female at Birth) Queen, but would rather be called a Drag Queen or Artist.

“I’m not a fragile, little flower darling. I can have them all for supper!”

While a drag queen is usually a male, who uses drag clothing and makeup to imitate and often exaggerate female gender signifiers and gender roles for entertainment purposes, Victoria despite being an exception is certainly in it to win it.

One among many reasons Victoria is on the show she just loves everything that drag allows them to do. She feels as though she can get away with anything she likes when in drag.

As Victoria Scone celebrates her birthday every year on the 6th of April, she reached the age of 27 in 2021. Also, so you know, her zodiac is Aries.

What Is Victoria Scone’s Real Name?

‘Victoria Scone’ is in fact a stage name. Her rarely heard real name is Emily Diapre.

Victoria’s hometown is Portsmouth, i.e, a port city and naval base on England’s south coast. Currently, in 2021, she lived and worked in Cardiff, the capital city of Wales.

Her early life including her family background was not yet understood by her fans.

Victoria Scone stands above 5’5”height and has an average of 60 Kg weight.

She rarely shows her no-make-up look on social media. Instead, Victoria is used to playing with bold, exaggerated makeup looks filled with color, from blues to beige nude colors, and reds. She cited the reason for this was she was terrified of being ridiculed as a woman starting in drag. “I wanted to heighten my appearance as much as humanly possible.”

Until 27 August 2021, Victoria Scone had 56.2K followers on her Instagram @victoriascone.

Meanwhile, Victoria enjoyed 26K followers on her Twitter @VictoriaScone after she joined in June 2018.

Victoria was followed by close 1,385 people on her Facebook @VictoriaScone.

Victoria just appeared to be learning her ways through TikTok on her TikTok @victoriascone.

You may as well find her on Cameo and can book her @victoriascone.com.

Before everybody knew Victoria Scone was chosen to be this season’s line-up for RuPaul’s Drag Race UK she had above an estimated $300K net worth.

Victoria is a professionally trained singer, dancer, and actor. She is been doing drag for three years, however, believes she has always been a drag queen.

She was doing pantomimes at a very young age and realized she was falling in with drag when she started to look up to Widow Twankey (in pantomime Aladdin) rather than Cinderella.

Is Victoria Scone A Lesbian?

Victoria Scone proudly identifies as a ‘celesbian’ on each of her social media bios. So you know, celesbian is a portmanteau of celebrity and lesbian, a female celebrity is known or reputed to be a lesbian and popular within the LGBT community.

Victoria Scone Partner: Is She Married Or Dating?

Victoria Scone never had been married before August 2021. She, however, openly dated this beauty with the name Dani.

Dani, who is on Instagram @danibuckland25 (with 1,171 followers), had worded — “better half of scone” as quoted by @victoriascone” — on its bio.

Then, last year in 2020, a month before Christmas, to a picture of them dressed in Christmasy-theme Victoria had captioned:

“Meet the better half of scone, the dresser, the lighting technician, the videographer, drink supplier, tight puller upper & partner 🥰
Ain’t we cute!” 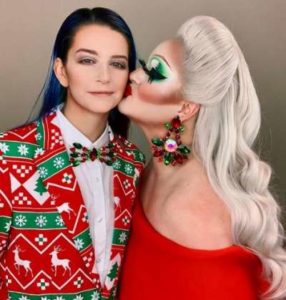 The last time the social media saw them together was on April 7th, 2021, when Dani wished her “favorite birthday princess” the happiest birthday.