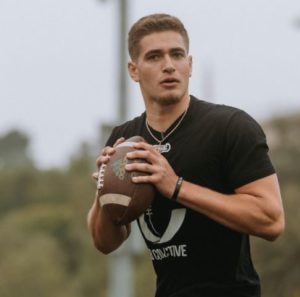 Jake Garcia, a Grayson High football athlete, is best known for committing to the University of Miami after dissolving his commitment with the University of Southern California. Learn more about him in this Wiki where we cover details on his mom, dad, and his girlfriend, along with his nationality.

For the fans of football, in 2021, a new show arrived on Netflix titled Title Town High, which might remind some fans of Last Chance U. The show followed the Wildcats football team and cheerleader team with exploring drama, rivalries, and of course romance. A few players on the show were given more focus, among them were, Jake Garcia.

Jake Garcia turned 18 years old in 2021. He celebrates his birthday every year on 20 October.

No, Jake Garcia is an American citizen who was born in Whittier, California, United States.

Jake Garcia was born to his parents: dad Randy Garcia and mom Yvonne Garcia. He followed the footsteps which were laid down by his dad, Randy who was a former quarterback for Nebraska University. So, when Jake received an invitation from Randy’s alma mater, he thanked them on his Twitter account.

Randy had a job in Los Angeles Police Department where he worked for 32 years. He retired from the service in 2012. Whereas, Yvonne worked as an administrative assistant and stayed in California while Randy and Jake were in Valdosta, Georgia in 2020.

For Jake’s career in Valdosta High, Randy and Yvonne legally separated to meet the Georgia residency rule. The court record stated that they separated on 20 August 2020. Jake’s parents had planned to get back together once his season at Valdosta High Ends.

More about his dad, Jake lost his paternal grandfather Raymond Garcia to COVID-19 at the age of 93 on 10 July 2020.

While Jake Garcia hasn’t spoken anything about having a sibling, but it was highly likely that Jake is the only child born to his parents Randy and Yvonne.

Jake Garcia’s high school football career started in California and ended in Georgia. According to 247Sports, Jake was the No. 4 pro-style quarterback in the Class of 2021. Splitting time in four games with the Rams, Garcia has thrown for 690 yards on 31-of-52 passing and eight touchdowns.

He also played for Long Beach Poly and Narbonne before he transferred to La Habra. However, the California Interscholastic Federation pushed football to 2021 due to COVID-19. So Jake and his father moved to Georgia and play for the Wildcats.

Jake had made it No. 18 prospect in ESPN’s 300. Initially, he had enrolled at Valdosta High School then again transferred to Grayson High from where he completed his game in a senior year. Garcia initially committed to USC but later committed to the  University of Miami, so he would be playing for Miami Hurricanes.

Many sports personalities like Greg Biggins, Steve Wiltfong, Brandon Huffman, and Blair Angulo had predicted that he would commit to the University of Miami.

A tall handsome hunk with a charming personality and a successful student-athlete, Jake Garcia is a total package any girl would want to date. He might’ve even dated a few girls but he is strictly keeping his dating life as a private matter.

his social media shared nothing on his love life, as Jake stayed strictly professional with the use of his social media. So, the fans who are interested in known more about his life certainly have to wait for him to divulge information on his dating life.

So, as of August 2021, with low-key relationship status, we would like to confirm that Jake is single until he gives a glimpse of his romantic life in public.

Before You Leave: Nick [From Growing Up Chrisley] Bio: Age, Height, Instagram