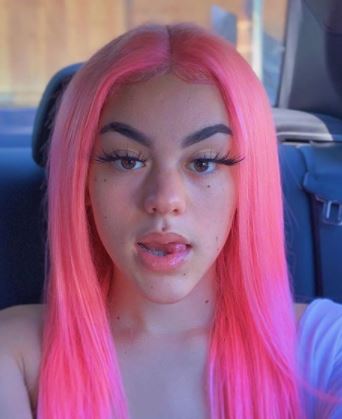 While TikTok fans were desperately searching for new background music for their videos, Ppcocaine emerged as a savior in late 2020. Soon, her songs went viral over TikTok and she gained massive popularity within a matter of weeks.

Furthermore, Ppcocaine established herself as a sparkly rap persona in the TikTok community. She claimed to be A Rico Nasty–inspired rapper and previously went by the name “trapbunniebubbles”.

Divulge into the world of Ppcocaine as you tag along with this wiki-style article. Also, get to know her age, family, and height as the article proceeds.

Ppcocaine who’s real name is Lilliane Catherine Diomi was 19 years old in 2020. She celebrates her birthday on 1st June.

Also, her name “Ppcocaine” stands for “Pretty Pink Cocaine.” The name was born one night, as she almost overdosed on pink cocaine called “2cb” given to her by her “sugar daddy”.

Ppcocaine is a light-skinned, so maybe wondering what her ethnicity is. Born to an African dad and a Caucasian mother, she flaunts a mixed ethnicity.

Born In Panorama, California, Ppcocaine was raised by her grandparents Cath and Kim Kliber, and her dad Bernard Diomi. Her grandmother worked as a nurse and grandfather worked at DWP. While her dad then managed several taco bells and in 2020 worked at the airport.

As for her mother, Ppcocaine shared that she had multiple kids with multiple baby-fathers. This meant Ppcocaine has a lot of step siblings.

Talking about her siblings, she had four — two of them, Michaela Rekla and Madison Rekla grew up with her, and the other two William Ashlynn and Erin Escobar grew separate.

Growing up, Ppcocaine’s family didn’t support her much as with what she was getting into. Furthermore, she claimed her relationship with her dad to be “On and Off”.

But, following her dreams, she began showing off her dance moves via Musically. She even got on the high school dance team and would later go on to train in ballet, tap jazz, and hip hop.

As for her education, she attended several schools including Canyon High, Birmingham Community Centre High, and Golden Valley High.

It’s no surprise that Ppcocaine struggled with addiction. The story about how she overdosed on what she thought was pink cocaine “2cb” is known to all as well. However, it was at the moment, she realized that she had to stop.

As of mid-August 2020, Ppcocaine shared that she was recovering from addiction and was two and a half months clean.

Also, she flaunts a stunning 1.8M followers on TikTok @trapbunniebubbles.

Ppcocaine’s net worth was estimated to be around $800 thousand.

So how did she account for it? Ppcocaine started paying the bills by working as a stripper. After some time, at the party, she met Naya (Next Girl Youngan) and Naya introduced her to “Spaindagoat”. Intrigued by his music, she started rapping to his beat and Viola! her talent was first recognized there and they started recording together.

Some of her popular songs include Three Musketeers, DDLG and PJ.

Apart from this, you can support her on OnlyFans @ppcocaine with a $25 subscription per month.

She planned to “make money form every industry and be the richest girl alive. ”

Given her history of having a girlfriend, yes we can say that Ppcocaine is gay. Moreover, she had been the star of the lesbian anthem for a long time.

As of August 2020, Ppcocaine so far has had three girlfriends, and each one of them either cheated on her or “jumped her!”. However, she didn’t disclose the names but confessed one, both cheated as well as jumped on her.

This should have already cleared the allegation against her about Queerbaiting for popular. We cant understand why people are hating this girl.

Since Ppcocaine has already established her sexuality to be a lesbian, it would be unnatural of her to take on a boyfriend. However, if she should ever want to experiment and have a boyfriend, who are we to judge?

As for the rumors about Daddy Kaine (@nextyoungin) being her boyfriend: first of all, Daddy Kaine is a lesbian as well. Secondly, in August 2020, Ppcocaine claimed Daddy Kaine to be her best friend. So, we can safely say that they weren’t dating as of then.

Just in case you don’t know who Daddy Kaine is, she is a fellow rapper and one of her frequent collaborators on her music including “Three Musketeers.”