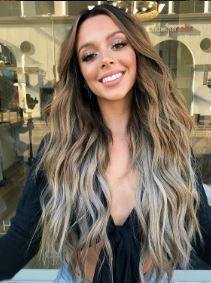 Known for her amazing personality, cute smile, and beautiful look, Eliza Minor grew into one of the trending social media stars. On her TikTok account, she has posted dancing videos, comedy video clips, and also videos performing lip-syncs.

In this article, we walk you through Eliza’s personal to professional life! Furthermore, read about her net worth, boyfriend, and siblings!

Being born in August, Eliza held Leo as her zodiac sign.

Eliza Minor was raised in the United States by her father named Mike Minor and mother whose name was not known but had an Instagram account under @tigergrad95.

Unsurprisingly, Eliza shared a very special bond with her parents and showed them off on Instagram.

On 10th May 2020, Eliza posted a picture of her mother wishing her on the occasion of mother’s day. The American beauty further added saying she couldn’t be more thankful to have her as her mom.

What’s more, Eliza Minor was not the only child of her parents and grew up next to three other siblings. She had a sister named Ansley Minor and two brothers: Gavin Minor and Grant Minor.

Eliza not only had a close relationship with her parents but also shared the same with her siblings. Ansley, two years her senior, is also a TikTok star who earned the spotlight operating under the name @ansleyyminor.

As of 2020, Eliza Minor owned five feet six inches (1.68 meters) height and had an approximate weight of 52 kilograms. As she was just running in her 16, she was likely to gain more height in the upcoming years.

Moreover, Eliza owned a YouTube channel with her elder sister and their titled Ansley & Eliza where they have earned 3.32K subscribers.

Eliza Minor went to Hickory Ridge High School for her early education. There, she was part of the Student Council and a Junior Varsity Cheerleader in her community. Eliza then began competing in tumbling and cheerleading. Due to her active participation in the field, she also decided to take part in the Miss North Carolina Teen.

Eliza was in her school when she participated in the Miss North Carolina Teen. Just at the age of 15, she won the title and also represented on the Miss Teen USA 2019 stage and became the youngest competitor at nationals that year.

As of 2020, Eliza was represented by the MMG-NY Modeling Management Agency.

Other than her contribution to the modeling field, Eliza also made an income from endorsements. She collaborated with brands like Orange Juice The Brand, custom.mg, Vaya Island, BOUTINE Los Angeles, PRINCESSPOLLY.COM.

Moving on, just at the age of 16, Eliza Minor had already amassed a net worth of below $250 thousand.

Eliza Minor might be single and not dating anyone, as of Aug 2020. However, people speculated that Eliza might be dating Dylan Davidson who is also a TikTok star and singer best known for his singles on both Spotify and Apple Music “Used to” and “Ultraviolet.”

The confusion was cleared when people found out that Dylan was dating Ansley Minor, sister of Eliza, and not Eliza.

However, it was not the only misunderstanding Eliza’s name became tied to. She got into the drama between Bryce Hall, social media star, and Addison Rae, an influencer.

Before Eliza, there had been a rumor that Bryce and Addison were dating. However, neither of them ever confirmed their relationship before Bryce made a Twitter post denying his relationship with Addison.

Later, Bryce was seen together with Eliza at a Sway House party. People again started speculating that Bryce and Addison were hiding their true feelings and relationship.

Addison decided to speak on people’s assumptions. On 3rd August 2020, Addison tweeted saying no one knew the full story about them. The TikTok star also claimed she chose to stay silent on every detail and things were explained privately.

Bryce also made a tweet saying “braddison” aka Bryce and Addison’s couple name “is the definition of confusing.” Replying to the tweet, Eliza claimed nothing about the night was confusing.

Eliza’s reply made people more confused but this time people left the three of them to handle their matter in private.