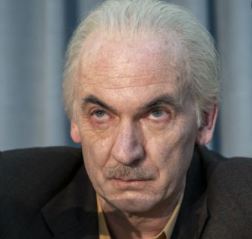 Polly Ritter is the wife of the late British actor, Paul Ritter.

Paul, who starred in Harry Potter as well as the James Bond franchise, passed away in 2021. At the time of his death, the legendary actor was 54 years old.

In this Polly Ritter wiki, read about Paul Ritter’s wife such as her age, job, and maiden name. Moreover, find out her photos, kids, and social media.

Paul Ritter Cause Of Death

Paul Ritter passed away on 5th April 2021. The later actor’s agent revealed a brain tumor as his cause of death.

Speaking with The Guardian, the agent confirmed the news by saying— “It is with great sadness we can confirm that Paul Ritter passed away last night.”

The agent then added— “Paul was an exceptionally talented actor playing an enormous variety of roles on stage and screen with extraordinary skill. He was fiercely intelligent, kind, and very funny. We will miss him greatly.”

Tributes Poured In For Paul Ritter

Stephen Mangan, Paul’s longtime friend, expressed his grief on Twitter. His tweet read— “Trying to find a way to talk about Paul Ritter and struggling. My friend since we were students together. So much talent and it shone from him even as a teenager. I was so lucky to know him and lucky too to work with him many times over the years. Wonderful man. RIP.”

American comedian, Rob Delaney also remembered Paul’s performance on Chernobyl, tweeting— “Knocked it out of the PARK in Chernobyl. Watching it I consciously thought, “Oh, we have a new movie star.” Between that & how funny he was in Friday Night Dinner… just unreal talent. Rest in peace, Paul Ritter.”

Meanwhile, British comic Robert Popper tweeted— “Devastated at this terribly sad news. Paul was a lovely, wonderful human being. Kind, funny, super caring, and the greatest actor I ever worked with x”

Paul’s “Viva Blackpool” co-star David Morrissey also had kind words for the late actor. Replying to The Guardian story, he tweeted— “So sad to hear this. Worked with him on Viva Blackpool and we had such a laugh. Such a lovely man and a wonderful actor. RIP”

Who Was Paul Ritter?

Paul Ritter was born on 5th March 1966 in Kent, England, United Kingdom. He didn’t hail from a show biz family. While his mother was Benard Cribbins’ class-mate, his father and Eric Sykes attended the same school.

Some of his memorable big-screen performances came in projects like “Hannibal Rising,” “The Libertine,” “Quantum Of Solace,” “Nowhere Boy,” “Their Finest,” and “The Audience”.

However, it was on TV that Paul truly earned his mettle. “City Lights,” “Land Girls,” “Vera,” “The Game,” “Mapp & Lucia,” “Hang Ups,” “No Offence,” “Resistance,” “Chernobyl,” “Cold Feet,” “Belgravia,” and “Friday Night Dinner” were some of the TV series starring the British actor.

In 2009, for his role on “The Norman Conquests,” Paul secured a Tony nod in the Best Performance for a Featured Actor in a Play category.

Even Paul hadn’t shared much about Polly including her age, job, and maiden name.

At the time of his death, Paul and Polly were still together. The actor died at home with his wife and their kids, Noah & Frank by his side.

Whenever Paul spoke about Polly and their kids, he was appreciative of the family life. He once said— “What I treasure is that it sort of feels like a family; there’s a kernel of something real there. We are all cocooned together in a suburban location for weeks on end, so ‘the family who plays together stay together.”

Besides Polly Ritter, Paul was survived by his two kids (both sons): Noah and Frank. As of April 2021, little was known about Frank and Noah.