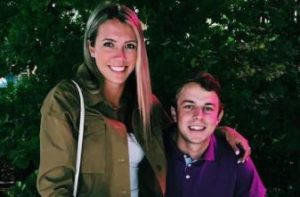 Lexie Hull, if you don’t know, is a member of the Stanford Cardinal’s women’s basketball team that won the NCAA title in 2021.

This Will Matthiessen wiki tries to explore facts about Lexi Hull’s boyfriend such as his age, height, and family. Furthermore, it highlights his MLB draft, net worth, and more.

In 2021, Will Matthiessen turned 23 years old. Plus, he celebrates his birthday on 9th January every year.

On his 23rd birthday, Lexie Hull shared a photo of them on Instagram. In an accompanying caption, she wrote— “23 never looked so good. happy birthday ❤️ missing you extra today!”

Coming from a family of five, Will has 2 siblings. A middle child by birth, he is a brother to a big sister named Hannah and a baby sister named Claire.

What’s more, Will hails from his hometown, Beaverton, Oregon. He and his family later relocated to West Linn, Oregon. To this day, his parents, Julie & Conrad, still work there.

Will’s father, Conrad attended Polytechnic School and the University of California, Santa Barbara. Meanwhile, his mother, Julie is a graduate of Monta Vista High and UCSB. A native of Cupertino, California, she was working at Xenium HR in 2021.

Delving further down in his family tree, Will’s granddad, John Matthiessen played rugby and soccer at Yale. Whereas, his grandmom, Dorothy Hughes Matthiessen was ranked no. 1 by ITF in 2010 in the age group of 75 years and above.

Will Matthiessen has a height of 6 feet 7 inches. Similarly, he weighed around 220 pounds as of 2021.

Even Will’s lanky stature paled in comparison to his boyish charms while outlining his distinct features.

Yes, Will is available on both Twitter and Instagram. Until April 2021, he entertained 904 followers and 2000 followers on the former and the latter respectively.

Around the same time, Will had over 920 followers on Facebook.

During the 2019 MLB Draft, the Pittsburgh Pirates selected Will Matthiessen as its 6th round pick (184 overall). In 2020, he penned a contract with the MLB outfit.

Will’s official contract arrived in February 2021. As part of the deal, he reportedly bagged $261.2 thousand in signing bonuses.

In 2019, Will honed his talents, playing for West Virginia Black Bears in the MLB Draft League.

Like his Standford years, Will accumulated several honors during his time at West Linn High School. His awards included the No. 1 ranked the third baseman in Oregon and the No. 5 overall recruit in Oregon.

Will Matthiessen And Lexie Hull’s Relationship

While attending Standford, Will met Lexie Hull, a fellow student-athlete at the university.

Will first appeared on Lexie’s Instagram in June 2020. Meanwhile, a month earlier, he had shared a photo of them on the platform from their trip to Abiqua Falls.

On 2021 Valentine’s Day, both Lexie and Will took to their respective Instagram profiles and celebrated the occasion.

A little info about Lexie Hull— She is a native of Spokane, Washington born to parents named Jaime and Jason Hull. She has a twin sister named Lacie, a fellow basketball star at Standford. Lexie stands 6 feet tall. A graduate of Central Valley High School, she studied Management Science & Engineering at Standford. Lexie also maintained a 4.0 GPA throughout high school.