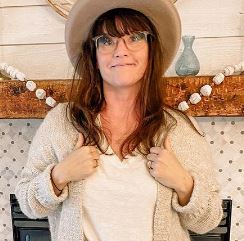 Lyndsay Lamb had a successful career as a real estate agent before she hopped into the entertainment business. She starred in HGTV’s show Unsellable Houses. Now, delve into this wiki to learn more about Lyndsay Lamb.

Lyndsay celebrates her birthday every year on 4 April. Naturally, the date of birth made her an Aries by zodiac sign. Furthermore, Lindsay Lamb turned 40 years in April of 2021.

Born to an anonymous father and mother Kathy Kuna DeWitte, Lyndsay was one of the twins born in her hometown of Snohomish, Washington, the United States. Her mother is featured on her social media, she also owns a Facebook profile, that holds very little information about her right now.

Moreover, Lyndsay has a twin sister named Leslie Renee Davis who is three minutes younger than her. Moreover, she also has an elder sister named Jennifer LaCourse Starling. Jennifer has two adorable daughters but shared no details about her husband.

Talking about education, Lyndsay joined Snohomish High School to get her high school degree. And she might’ve even attended college but shared no information regarding that.

Lyndsay Lamb decided to get bangs when she was in sixth grade because it was easier for people to distinguish between the two sisters. Plus, it also became her distinct features. She stood tall at a height of 5 feet 7 inches (1.70 meters). Likewise, she weighed about 63 kilograms (138 lbs).

Lyndsay was on Facebook with 1085 friends and family on the platform as of April 2021. Whereas, 460 people followed her on her Facebook profile. The platform is filled with snaps with her kids and her sister Leslie.

In the same way, Lyndsay was also on Instagram with 10k followers. She shared some of the preservable moments from her life on her IG. However, Lyndsay couldn’t be discovered on Twitter.

Lyndsay started her professional career in 2001 working for Bank of America. As a banker, she spent a little above 4 years. After that, she along with her sister joined Dream Dinners in marketing for 4 years and 3 months. There, Lyndsay absorbed vast knowledge about how digital marketing was used to push sales of products.

Before starting her own real estate agent firm, Lyndsay also briefly worked for Custom Project. But, in 2008 she decided to start her business and founded Lamb Real Estate. But when her son showed health problems, she had no choice but to halt the business transactions.

However, Lyndsay’s sister knew how much she loved her work so, to avoid losing clients, Leslie got her real estate agent license and started immediately. But, instead of taking over the business once again, she partnered with his sister and saw some glorious years in the business after 2015.

Not only that, but the twin sisters also landed the opportunity to star in HGTV’s reality show Unsellable Houses after High Noon Entertainment approached them with a business proposal. The sisters were filmed during their usual course of business.

Lyndsay often received compliments for her designing skills and it was that skill that set her apart from other renovators. Plus, her estimated net worth of $10,000 per episode contributed to her burgeoning net worth.

Yes, Lyndsay Lamb is married. Like her sister Leslie, she also married her high school sweetheart, Justin Lamb. As Lyndsay revealed, their boyfriends knew that they were not marrying one girl but two.

Lyndsay and her husband, Justin stayed happily married for 20 years. The couple, who grew up in the hometown of Snohomish, welcomed their son Miles. More about her son in the next section.

But, unlike Leslie, Lyndsay shared zero information on her marriage life. She also didn’t share any information about her husband and the job he did. But one thing that we know about is, the twins’ husbands were college roommates.

What Happened To Lyndsay Lamb’s Son?

When Lyndsay Lamb was enjoying the time of her life with her beautiful family, bad news fell on to her that took away her blissfulness. In 2013, her son, Miles was diagnosed with cancer and this halted her professional life.

Then Lyndsey stayed back home, looking after her son while her sister took over the business. Within a year, Miles got treated, and then she resumed her career. As it seems, her son is doing pretty well.