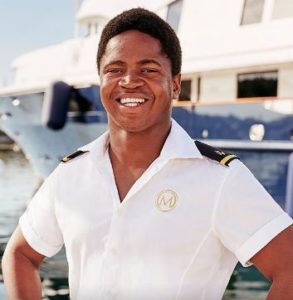 Meet Mzi “Zee” Dempers, a new cast member of Below Deck Mediterranean who was born and raised in South Africa. He was later adopted by a white family and his brothers are also in the yachting family. He accepted his first job on deck but ended up running into some visa constraints that prevented him from leaving the country.

Learn other interesting facts about him in this Mzi “Zee” Dempers Wiki.

More From Us: Mathew Shea Wiki: Below Deck, Wife, Age, Net Worth

Mzi “Zee” Dempers has kept much information about himself a secret including his age. However, he didn’t appear a month older than 32 years old as of 2021. There are no details on his birthday. So, we don’t have any information on his exact age, zodiac, and birthday.

Mzi “Zee” Dempers was born in Durban, KwaZulu-Natal, in South Africa. However, he was adopted at the age of three by a large family. There exist no information on his biological parents.

As for Mzi’s adoptive parents, they also stay away from the public attention. He appeared with his adoptive father and his siblings during his sister’s wedding. That’s all we’ve been offered as of this writing.

Coming to details on his siblings; Mzi has two older brothers who are in the yachting business, one is a Captain while the other is the chief officer. As for his sister, her name is Lisa Dempers. Lisas attended Rhenish Girls’ High School. She then studied at the University of the Witwatersrand.

Lisa earned her bachelor’s degree in Political Science and Government. She started her career as an account assistant at Striata. Then she joined Leaf International Inc as an account manager. After that, Lisa joined Wunderman South Africa as Business Unit Director followed by GTB where she landed the job of Business Unit Director. Later, she ranked up to become General Manager.

Furthermore, Lisa joined Wunderman Thompson South Africa as Business Unit Director and has been working as Business Director since June of 2020.

The very first thing everyone takes notice of Miz is his million-dollar smile. Mzi “Zee” Dempers stands tall at a height of 5 feet 7 inches (1.70 meters). Whereas, he weighed around 71 kilograms (156 lbs).

Mzi “Zee” Dempers On Below Deck

Mzi “Zee” Dempers debuted in season 6 of Below Deck Mediterranean. He was one of the seven casts and was aboard on Lady Michelle as a deckhand. Joining him are Chef Mathew Shea, chief stew Katie Flood, second stew Lexi Wilson, third stew Courtney Veale, David Pascoe, and Lloyd Spencer.

The captain of the yacht is Sandy Yawn who learned twerking with Courtney and one of the two recurring casts from the previous season. The other recurring cast being Malia White.

Early in season 6, Mzi already got into trouble. He forgot to tie the jetski onto the yacht. On the preview, he accepted it as a learning experience but admitted he still didn’t know how to correct it.

But, Malia White let him off the hook this time as it was his first time. She called the accident “rite of passage.” But, he is not inexperienced, he took actual courses to be on a boat.

Although yet to receive an official confirmation, Mzi “Zee” Dempers has around $400 thousand net worth.

Mzi “Zee” Dempers attended Maritzburg College from where he completed his high school education in 2010. Then, he joined South African College School in 2011-2012. Furthermore, from 2013 to 2016, she joined the University of Cape Town where she studied Political Studies & Film and Media.

As for Mzi’s jobs, he attended SACS High School where he worked as a part-time Rugby Coach from March 2013-August 2016. He also worked at Coza Productions full time as an assistant producer from February of 2015-February of 2017.

Mzi then decided to follow in his brother’s footsteps and start pursuing a career on the sea. Plus, he is excited to see the world and absorb a new culture. But he needs to take a necessary course to start working as a deckhand.

Talking about the course Miz shared with Nicki Swift, “I mean, there’s different levels to go into it. You can do your basic deckhand course if you want to be on the exterior. That comes with basic maintenance techniques, learning about what different teaks do.”

He added further, “I mean, the way to maintain teak, how to varnish, how to wash down, how to polish, all that simple stuff. And then there’s another level. If you want to do your Yachtmasters, and then you learn navigation and a whole bunch of more interesting things. There are different levels, I would say, as to how you want to enter.”

Coming to the social media reach, Mzi “Zee” Dempers could be discovered on all three platforms. His Twitter account earned 119 followers as of June 2021. Furthermore, he only tweeted 141 times.

Similarly, he is also on Facebook where he posts on a regular basis.

Furthermore, Mzi was also on Instagram with 2340 followers where he made a total of 99 posts as of this writing in late June 2021.

Mzi “Zee” Dempers had at least one relationship. He was snapped getting cozy with a girl back in February of 2018, but there were no further updates on that relationship. Then, it appeared he was single before arriving on Below Deck.

But teaser of the premiere of the show displayed Mzi kissing with Courtney Veale. So, there was a budding relationship that we might get to witness between the two.

More From Us: Valentin Kretz Wiki: The Parisian Agency, Age, Net Worth