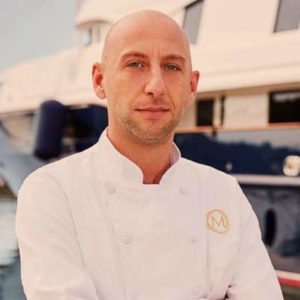 Meet Chef Matthew Shea from Below Deck Mediterranean Season 6. In a teaser clip, shared ahead of the June 28, 2021 premiere of the season, Matthew pondered quitting the Lady Michelle yacht ahead of the first charter. Why? Find out in this Mathew Shea Wiki.

Born supposedly a hardworking, honest, and reliable Virgo, Mathew Shea grew up celebrating his birthday every year on September 11th. He reached the age of 34 in 2020.

More From ‘Below Deck’: Lloyd Spencer Wiki: Below Deck, Net Worth, Girlfriend

His parents must be proud of him for a career as part of which he cooked for the “top one-percenters of the world.”

Matthew’s father is studied at the American Academy of Dramatic Arts and went to t. John’s Preparatory School.

For siblings, Matthew has a sister Anna Shea and a brother Patrick (Pat) Shea.

Sister Anna, age 39, is the owner and founder of Illuminated Advisors. Happily married with a kid, she went to The American Academy of Dramatic Arts for AA in Acting, Musical Theater, and Dance just like her father.

Meanwhile, less was understood about Patrick, age 41, who lived in Denver, Colorado.

Matthew was born in the sailing hub of New England, a northeastern region of the United States. So, he grew up in Warwick and attended Toll Gate High School, where he followed the culinary vocational program.

Matthew Shea stands below 6 feet in height. Back in 2019, he shared a throwback memory from 2013’s winter on his Instagram which showed the happiest Matthew sharing a photo frame with none other than Hugh Jackman and others in what appeared to some kind of event.

So, in the picture, Hugh Jackman, who is putting his hands on Matthew’s shoulder in a friendly gesture, clearly taller than Matthew. Just so you know, The Wolverine star is 6’3” tall.

Mathew Shea On Below Deck

It’s been speculated that Chef Matthew might make history on Below Deck Mediterranean leaving the season before the Charter began. That he is getting freaked out about getting ready for the journey.

This dilemma on whether or not he can work on the “Lady Michelle” had a lot to do with his Day 1 knee injury and of course the fact that the first charter included a wedding celebration.

“I didn’t sleep. [I’m] full of nerves. Thinking menus, thinking wedding, thinking everything. I’m not prepped at all.”

As he struggled to walk down the stairs in the early morning hours he appeared just about to admit defeat.

All this sure shook up the crew and gave the season a difficult start.

S06 E01 showed Mathew having to leave to get an MRI (he hurt his knee the day before). While the rest of the group including the pissed-off chef chief stew Katie Flood was left to cook dinner for the guests.

However, despite all this, Katie, the chief stew who struggled without a chef in the first episode still had a pleasant impression of Matthew.

Matthew Shea had above an estimated $600K net worth before the world got to know about his Below Deck stint. So, he must be doing a huge favor to his existing fortune participating on Below Deck.

According to Crewfinders, chefs like Matthew made anywhere between $52K and $72K per charter season on the kind of yacht featured on Below Deck.

Also as per the average salary rates for super-yacht chefs, chefs like Matthew are estimated to make a tax-free base salary of anywhere between $85K and $100K.

Meanwhile, Matthew did not seem as active on his Twitter @MShea_Chef with 6 followers.

Matthew Shea had never been married before the time of this writing (June 2021). Also, he did not seem to have a girlfriend at the time.

Going through his Instagram, one must have speculated him to be in a relationship with this lady with the name Harley Jones. He had wished her writing “Happy birthday asshole. I love you ❤️” on May 21, 2021. But in fact, Harley is in a relationship with some other guy named Jordan Fleischer. And surprisingly, she was also working as a digital marketing coordinator at Illuminated Advisors, the company Mathew’s sister owned.