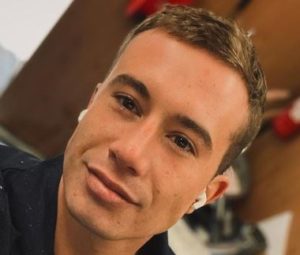 Below Deck Mediterranean’s new face, David Pascoe was already making a buzz over the internet with his stunning looks and a good attitude. And naturally, fans wanted to know if he had a girlfriend and what his net worth was.

So, here we are, easing your queries over this David Pascoe Wiki.

David Pascoe was reportedly born in 1991. That made him 30 years of age as he first appeared on Below Deck Mediterranean in 2021.

Although David Pascoe was raised in Devon, UK, he originally hails from Italy. So, that would make him of either British or Italian nationality.

As for his family, not much was shared about them, except for the fact that they moved to the UK shortly after David was born. Also, we were informed of David’s lovely grandmother who often went on drives with him. She was healthy and doing well as of May 2021.

Mentioning his distinct features, David has dark eyes and a chiseled jawline.

David Pascoe On Below Deck

David Pascoe joined Below Deck Mediterranean for its sixth installment in June 2021. He was one of the crews aboard the “Lady Michelle” alongside Katie Flood, Malia White, Mathew Shea, Lexi Wilson, Courtney Veale, Lloyd Spencer, and Mzi “Zee” Dempers.

The captain of the ship then was no other than the returning cast Sandy Yawn.

Just in case you are curious, Lady Michelle is a 180ft long yacht and boasts six cabins, accommodating 12 guests and a crew of 14.

His BravoTV profile then depicted his persona as “With experience on multiple motor yachts up to 55 meters, David is thrilled to bring his work ethic and good attitude onboard mega-yacht Lady Michelle.”

So, what’s his deal? Well, if you have been Below Deck Mediterranean then you already know that David is well versed with the yachting industry, and his experience in the field was second to none.

Before joining Below Deck, David was working as the feet captain at Powerboat and Yacht Management in Cannes, France. But this was the first time David ever took on the role of a captain. Previously, he majorly worked as a deckhand for yachting industries like M/Y “Azamanta”, M/Y “Belongfers”, M/Y “Living the Dream”, and Seven Yachts.

Also, David has worked as a leisure manager at Packdean Holidays and operations manager at SurfDubai.

Meanwhile, David was also working as a beach lifeguard at RNLI from 2009 to 2014. Shortly after 2014, David even took the job as a care worker at a brain injury rehabilitation unit

In light of his education, David graduated from Kingsbridge Community College in 2009.

But David already had an IMDB profile with credit to Below Deck Mediterranean (2021).

Most of his IG posts then featured his time over the ocean — riding the waves, and documenting his hands-on work experience. Moreover, instead of only showing the bright side, David even exposed the messy side of his job.

Apart from that, David’s passion for photography and videography was also often reflected in his IG posts and stories. In case you missed it, David has highlighted all his stories named “Light & Colours”, capturing various surroundings such as skylines and animals.

David Pascoe Girlfriend, Is He Dating Anyone?

David Pascoe didn’t seem like he was dating anyone when he first joined Below Deck Mediterranean in 2021.

As seen on the Below Deck trailer, which was released on May 27, David and a fellow crew member Lloyd Spencer looked like they were fighting over the affection of newly single Malia White. So, could Malia be David’s future girlfriend?

However, let’s not jump to a conclusion as Below Deck is popularly known for its drama and drunken shenanigans.

Malia broke up with her boyfriend, chef Tom Checketts, in September 2020.

Aside from Below Deck, we’ve also checked over David’s social media for hints of his girlfriend. But sadly, we found none. David seemed like the guy who cherished privacy in his dating life. His only love then was his cute little dogs.