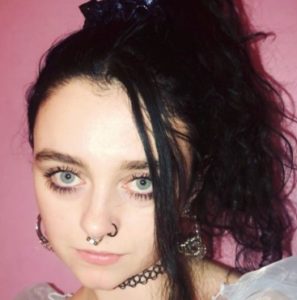 Coronation Street, commonly referred to as Corrie, is a British soap opera that has been running on ITV since 1960. In the course of these past 60 years, the viewers of the show have gone on to love quite a few characters. Roy Cropper, Steve McDonald, Carla Connor are some of the fan-favorite characters.

It should not be an overstatement if someone tells you that the recent addition in the cast of Corrie could be the fan’s favorite in the coming days. It’s no other than the young and beautiful actress, Mollie Gallagher, who plays Nina in Coronation Street. Mollie joined the ITV show in 2019.

In such a short time, Mollie has already gone on to win the hearts of many Corrie viewers. This article will be all about her and her role in the show. Also, get insights into her dating life and relation to British singer/songwriter, Liam Gallagher, in the wiki-article below.

Since Mollie Gallagher was born in the year 1997 and celebrated her birthday on December 11, her age must be 23 as of January 2021. Furthermore, going by her birthdate, she is a Sagittarius.

Mollie was born to her parents in her hometown in Manchester, United Kingdom. Not much is known about her early childhood and upbringing.

Not much is known about Mollie Gallagher’s dad and mum too, but one thing is certain that they are not obviously Liam Gallagher, a British singer/songwriter, and his girlfriend Lisa Moorish. Moreover, Liam and Lisa’s daughter, Molly Gallagher, has a different spelling of her first name.

Manchester native was interested in acting since a very young age. Pursuing her interest, Mollie attended ALRA-The Academy of Live and Recorded Arts for education. At ALRA, Mollie trained herself hard to become a great actor.

The Manchester native Mollie Gallagher stands at a height of 5 feet 1 inches and weighs no more than 50 kilograms. Her distinctive features include dark brown curly hair and blue-green eyes.

Actress Mollie Gallagher boasts massive social media reach since is very active on her Instagram, Facebook, and Twitter handles. As of Jan 2021, she had a combined total of more than 20 thousand followers on her social media handle.

Although Mollie started her career as a model, over time, she has established herself to become one heck of an actor. Nina in Coronation Street was Mollie’s first acting role. She joined the show as a cast member in November 2019.

Her character Nina is the niece of our beloved Roy Cropper. After Roy discovers his mom Sylvia had an affair in the 1950s and later had a child named Richard with her boyfriend, Roy tracks his brother down in 2019 by playing an online game called Scrabble.

As Roy later finds out, his long-lost brother was battling pulmonary fibrosis, he goes to the hospital to visit him. Not long before their meeting, Richard passed away. After her father’s death, Nine goes to live with her uncle Roy in his flat above the cafe.

For her role of Nina, Mollie even won the award for Best Newcomer at Inside Soap Awards. Ahead of the award ceremony, Mollie had even broken the news of her nomination to her fans through her Instagram handle.

“Really happy to have been nominated for best newcomer at the inside soap awards woooo,” Mollie wrote on September 15, 2020.

Besides Coronation Street, Mollie has also appeared as herself in Granada Reports.

Mollie Gallagher’s net worth is reported to be under $100 thousand.

Should Not Miss: Catherine Mooty Wiki: Net Worth, Age, Measurements

Though the emerging English actress Mollie Gallagher had some on-screen romance with her female co-star Tanisha Gorey in Coronation Street, she is not a lesbian in real life.

In fact, Mollie Gallagher has a boyfriend named Dan, who appears quite often on Mollie’s social media handles.

As of January 2021, the duo had been dating for at least a year now. According to Mollie’s posts, her boyfriend Dan is an editor at ITV and both of them have the same zodiac sign — Sagittarius.

Mollie’s lover celebrated his birthday with her on December 15, 2020. Coronation Street star wished him on his birthday. Uploading a picture of herself and Dan, Mollie wrote, “Happy birthday to my fave, love ya lots 💓💘💕💖💓💝 Sagittarius X2 🥰” 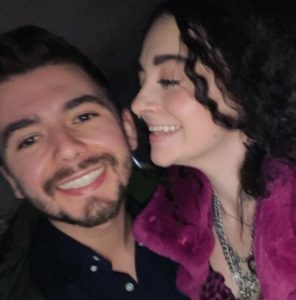 Mollie Gallagher with her boyfriend, Dan.

Mollie’s first post with Dan was back on June 23, 2020. Posting a picture of herself and her boyfriend, she wrote, “Mol n Dan a few months ago.”

On August 19, 2020, Mollie then gave another update on her relationship with her fans. Attaching a photo of herself, she revealed that she and Dan were going on a date.