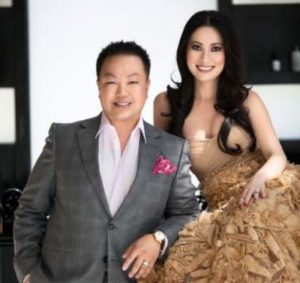 Christine, the real-life “Crazy Rich Asian”, is the socialite wife of renowned celebrity plastic surgeon Dr. Gabriel Chiu, starring on Netflix’s reality TV show, Bling empire. The show was released sometime in Jan. 2021, and people naturally wanted to know all about its casts, their love-life, and more.

So, the writing below is about Dr. Gabriel Chiu, who given the dynasties were still a thing in China, would have been the son of the emperor.

Speaking of ethnicity, Gabriel Chiu is the 24th generation direct descendant of the Chinese Song dynasty. And while Christine, who is originally from Taiwan, never spoke about why she was cut off from her affluent family, she has already revealed so much about her in-laws.

Gabriel was brought up in a conventional and conservative Chinese family by very strict parents who made sure everyone in the family attend Bel Air Presbyterian Church. Even Christine admitted to being in “the dog house” with Gabriel’s family. For eleven years, she was shunned because she could not conceive a male heir which of course changed after “Baby G”, her “miracle child” came along in 2018.

Just like his wife Gabriel appears nothing like his contemporaries he shared his age numbers with. Instead, he looks much younger. Christine must have rubbed in him, her love for fitness and a healthy lifestyle.

Gabriel Chiu stands to a height of 5′ 8″ and a lately reported weight of under 76 kg.

Gabriel Chiu is a Beverly Hills plastic and reconstructive surgeon with a long-ago (2014) reported net worth of $20 million. He has a six-month waiting list and a global client base who fly across the world to see him.

Regarding education, Gabriel received his degree in Microbiology and Immunology at the University of California Berkeley. Then, he completed medical school at the Western University of Health Sciences in Southern California. Afterward, he began his general surgery residency in the St. John’s Health System in Detroit, Michigan, got transferred to Cuyahoga Falls General Hospital in Ohio.

As residency came to an end, he began a fellowship in plastic and reconstructive surgery at the Philadelphia College of Osteopathic Medicine. There, he was selected Chief Fellow of Plastic and Reconstructive Surgery. Eventually, he returned to California, where he started his own private practice, Beverly Hills Plastic Surgery. Known for combining highly advanced medical techniques with a unique and skilled artistic perspective, Dr. Chiu’s natural-looking “couture contouring” is highly sought out by celebrities, athletes, moguls, and even royalty.

Between running a multi-billion dollar business and traveling the world, Gabriel and Christine also faced some real challenges even their whopping wealth could not solve.

The Asian-American pair opened up about their fertility issues, difficult pregnancy, and baby #2 plans.

Gabriel and his wife meet with their doctor to discuss having another baby when the doctor suggested their only healthy option would be having a baby via surrogacy. On June 29th, 2018, they had had their son Gabriel Christian Chiu III (named after Gabriel and his father, Gabriel Chiu I).

Both Gabriel and their doctor made it clear to Christine that her being pregnant again is not an option. But this still did not ease her thoughts on surrogacy. About it, she said,

“I honestly just never even considered surrogacy. I was always under the impression that surrogacy was something that Asians tend to look down on, or stay away from.”

Christine said she just did not want to do anything or make any decisions that would offend her husband’s parents and bring shame to the Chiu family. Also, she seemed quite sure the in-laws would not be on board with them having a surrogate baby. She actually spoke the “very traditional” family would “hate” the idea of it. 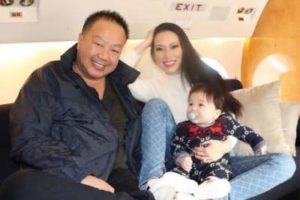 For now, their son “Baby G” is literally the apple of their eyes. For his first birthday, the couple donated one million dollars on behalf of their son to a cause providing free museum admission to children in underserved communities. And this was not an ordinary birthday bash, with a custom-built roller coaster, Ferris wheel, a wide array of Gucci gifts, entertainers, an arcade, live musical performances, a 10-course catering menu, and more.